The Insecure Writer’s Support Group virtually meets the first Wednesday of each month, and lets us share struggles, triumphs, quandaries, and fears. This month’s question is:

What personal traits have you written into your character(s)?

I’ve spoken before about how Emeline Rosalie Troy is my Doppelgänger. We’re not identical (e.g., I only wish I’d gone to Vassar!), but I deliberately, strongly based her after myself when I went back to Little Ragdoll from scratch and memory in November 2010.

We both had hyperlexia at age three, with the adult, uncensored version of Grimms’ Fairytales; we both love Hermann Hesse; we were very advanced readers from a young age; we share interests including world religions and languages, history, and philosophy; we had menarche a month before our twelfth birthdays; we’re very drawn to the story of Krishna; we didn’t have our first relationship till age 28; and George is our favourite Beatle.

Writing Chapter 6, “Halloween Wedding Gone Awry,” of my hiatused WIP Justine Grown Up planted a seed which gave me the courage to eventually, finally pull the plug on my dead-end, dysfunctional, mentally and emotionally abusive relationship with Sergey. During the first, much longer section of the chapter, Emeline’s having this back-and-forth with her sisters, sisters-in-law, and surrogate mother Sarah, expressing the same grievances boiling in my own mind as everyone tells her exactly what I was told.

I had a rather slow start to JuNoWriMo, thanks to doing one final check of Swan before approving the final version for hardcover production, but I pulled out and overachieved after all. Nothing like my mammoth 100K+ of last year, but good enough for me considering. One day, I wrote over 6K.

I’m also doing really well so far with Camp NaNo. I’d like to finally be done with A Dream Deferred by the NaNo. As for the issue with the subplot I mentioned in a previous post, I think it might be better to move part of it into the future fifth book. It’s just too rushed and dumped on the page, and then dropped.

Several characters mention the reality of a reunion with a long-presumed dead loved one after decades of separation. The love and gratitude are strong, but one can’t immediately resume the same kind of loving bond. Sometimes a reunion is meant more for closure. Each person has one’s own life, and writing letters and occasionally visiting are all that’s needed. 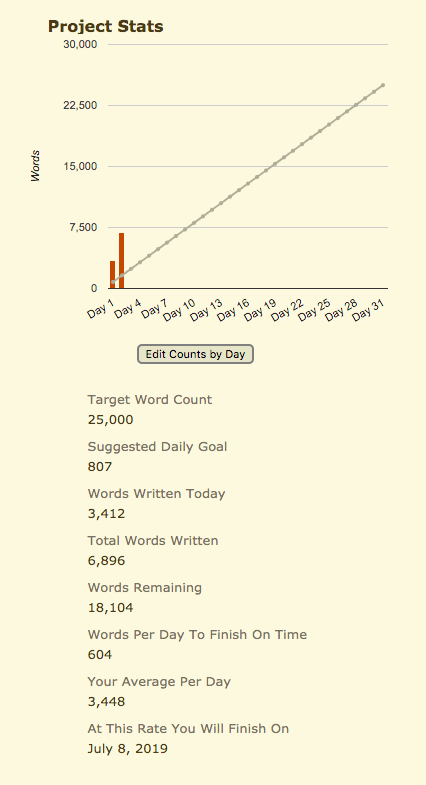 I’ve continued making lots of awesome genealogical discoveries, including finally breaking down some longstanding brick walls. My maternal grandma, my only surviving grandparent, will be so happy to learn the names of our Italian ancestors and see pictures of her aunts and uncles.

I’m also thrilled to learn my great-great-grandma Josephine (née Maria Giuseppa) was an only child born when her mother was 47. There was obviously no IVF in 1859, so this was a medical miracle. It gives me hope that Samuel or Anastasiya will exist before time runs out.

If something is meant to happen, it’ll happen. Everything arrives at the right time, to paraphrase a line in “All Things Must Pass.” Marriage, parenthood, and publication might not occur by the so-called normal age, but good things are well worth the wait.

P.S.: I’ve begun actively maintaining my Instagram page. Most of my posts are of my artwork, book covers, and the garden, and it means a lot to me that so many people have liked my art.

8 thoughts on “IWSG—July odds and sods”