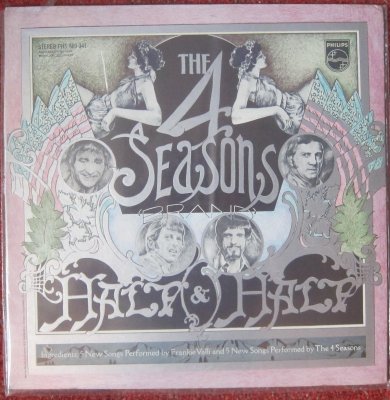 Image used solely to illustrate the subject for the purposes of an album review, and consistent with Fair Use Doctrine

Released May 1970, Half and Half saw The Four Seasons returning to a more familiar pop and soft rock sound, after the critical success but commercial failure of January 1969’s Genuine Imitation Life Gazette. Longtime fans were confused and angered by this radical departure from their signature sound, and this change in direction did nothing to garner many new fans.

Songwriter Bob Gaudio went back to the drawing board for what turned out to be the band’s final album on the Phillips label, and produced songs that felt like a more mature, updated version of their previous hits. They’re the obvious work of The Four Seasons being themselves, not trying to remake themselves at a very awkward crossroads in popular music history.

Some fans feel the album suffers from its deliberate half-and-half direction (corresponding to the title). Half the songs are proper Four Seasons’ songs, while the other half are Frankie Valli solo. However, I don’t find that confusing or jarring. It’s just how this album came together!

I love how it showcases Bob Gaudio’s continued maturation and evolution as a songwriter. Of course the hits he wrote in the Sixties are awesome, but he couldn’t be expected to keep doing songs like “Dawn (Go Away),” “Sherry,” “Ronnie,” “Candy Girl,” and “Girl Come Running” as he approached thirty. It’s the same reason I no longer write like I did as a teenager, even though the core elements are much the same.

Songwriters, musicians, writers, artists, etc., who stay in the exact same style their entire creative careers are boring. All creators need to grow, evolve, change, mature, and develop over time. It doesn’t mean each project necessarily has a radically different style. One can easily mature and evolve within that same general voice and style. As new elements are added, they naturally mesh with the pre-existing style and voice.

It’s a shame The Four Seasons grew into such a smooth, mature style after their popularity peak. Their albums from 1969–77 are such a wonderful treat, possibly their best work, night and day next to their earliest hits most people associate with them, but most people are completely unfamiliar with them.

Sadly, most people automatically wrote them off as unhip, an embarrassing reminder of a different musical milieu. No matter how much they evolved with the times and tried different things, that could never cut it for people who’d already moved on to newer bands. A lot of artists who’d enjoyed great popularity in the early and mid-Sixties sank in popularity almost overnight in 1968-69, replaced by new bands. I’ve heard it called the British Invasion in reverse.

Half and Half only reached #190 in the U.S., though it did spawn three minor hits. This was also the final album to feature founding member and lead guitarist Tommy DeVito (who’ll turn 91 on 19 June). Truly, a perfect farewell to the second of their two classic lineups.

3 thoughts on “A smooth farewell to a classic lineup”