My favouritest of Harold Lloyd’s silent features, Speedy, was released 7 April 1928. It was Harold’s final silent, and is such a beautiful, poignant farewell to this era of his career. Harold alternated gag comedies with character comedies, and this is a gag comedy.

New York City is a city of speed, progress, fast-paced lives, but not so for Pop Dillon (Bert Woodruff), who drives the city’s last horse-drawn streetcar. He lives with his granddaughter Jane (Ann Christy), who’s going steady with Harold “Speedy” Swift.

Railroad officials have been pestering Pop to sell them his streetcar, but he refuses to take their offer. Either he sells on his terms, for his price, or not at all.

We now learn Speedy has a new job, the latest in a long line of short-lived jobs. Each time, he insists this job will be successful. His jobs all have one thing in common—being within phoning distance of Yankee Stadium.

Speedy’s latest job is as a soda jerk, and he constantly phones for the latest score. Speedy has a very clever way of communicating this to his co-workers, who love the Yankees just as much as he does. Harold always had such ingenious gags, perhaps partly a result of having to learn how to navigate life with only eight fingers. He had to figure out ways to do things other people might never consider.

Speedy knows he’s out of this job too when there’s a mishap with flowers he’s supposed to deliver to the boss’s wife. Pop and Jane are rather upset, but he assures them he’ll quickly find a replacement job, just as he always does. Speedy also promises Jane they’ll go to Coney Island. 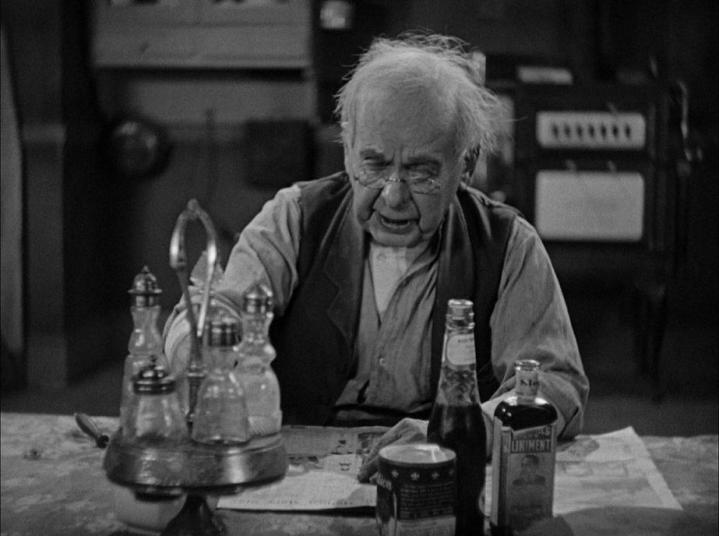 The vice-president of the railroad company comes to ask for Pop’s rock-bottom price. While he’s writing the figure, Speedy sees a newspaper story announcing a planned merger of streetcars, which can’t succeed unless small franchises are bought up. Speedy conveniently arranges for the card with Pop’s price to fall on the floor, and Speedy changes it from $10,000 to $70,000.

Harold writes with his left hand in this scene. Though he was able to write with his three-fingered right hand, it makes me happiest to see Harold doing things left-handed. That must’ve been a huge shot of pride for the lefties in the audience, in an era when a great majority of them were bullied and shamed out of their natural inclination.

Speedy and Jane then go to Coney Island. I absolutely love the footage of real Coney Island rides, all of which now exist only in memory. These people were so lucky to be able to go there and experience all these wonderful attractions, food stands, games, prizes, kiosks, and rides, and to have such cheap subway fare. 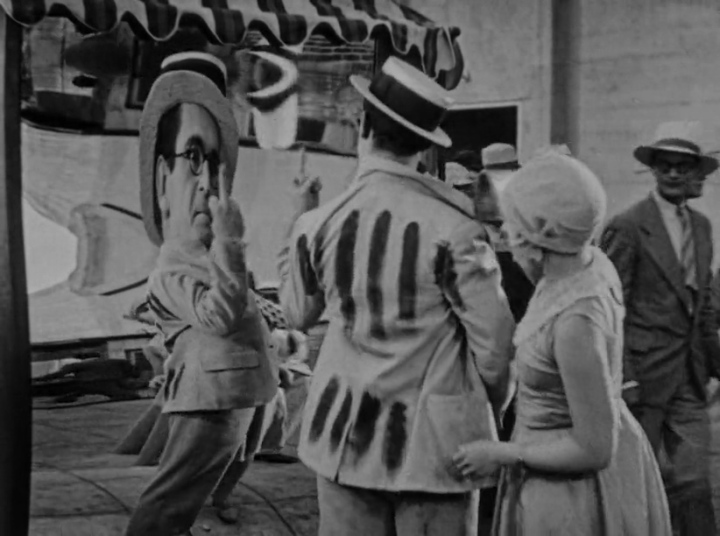 Before a curved mirror, Speedy gives himself the finger, possibly the first known instance of this on film.

After a day full of fun, and many misunderstandings with other amusement park-goers, Speedy and Jane head home with almost too much to carry, and a dog who wouldn’t leave them alone. They ride home in the back of a furniture truck, and play at it being their own home.

Speedy proposes, and Jane says she won’t think of it until Pop’s affairs are settled. Speedy promises to get a job in the morning, and to help Pop.

That next job is as a cabbie, which of course quickly descends into disaster and comedic misunderstandings. One of the gags involves a suitcase leaking a trail of liquid in front of a cop, which 1928 audiences understood meant he was violating Prohibition.

In this era, it was only 15 cents for the first quarter-mile, and five cents per each additional quarter-mile. 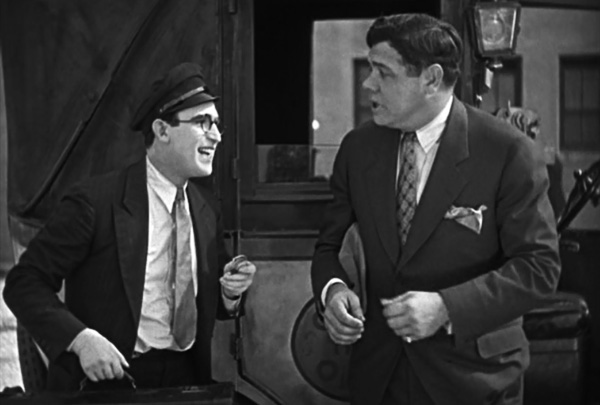 Speedy eventually gets the passenger of a lifetime—Babe Ruth. During the drive to Yankee Stadium, Speedy barely watches the road, so overcome with star fever. Babe barely arrives in one piece, but nevertheless invites Speedy to watch the game.

Who should be right in front of Speedy at the game but his boss! Also at the game is the cop who wrote him two tickets.

While hiding in a phonebooth, Speedy overhears the railroad bosses hatching a plan to drive Pop out of business. If the car doesn’t run at least once every 24 hours, he’ll have to give it up. Towards this end, they plan to start a fight to distract him, and steal the car during it.

At home, Speedy notices Pop is sick, and asks if he can drive the car for the next few days. Pop agrees.

Now it’s up to Speedy to figure out a way to save the day.