Welcome to this year’s celebration of classic silent and early sound horror films with landmark anniversaries! As always, I’m kicking off with master Georges Méliès. Sadly, his one 1898 horror film, The Cave of the Demons, is lost, so I’ll have to start with 1903.

I know the soundtrack isn’t the most appropriate, but I wanted to show an HD version

The Monster (Le Monstre) released 30 June 1903, and tells the story of an Egyptian prince who wants to resurrect his wife. A priest (Méliès) produces her skeleton from the coffin and prays over her. The skeleton then starts dancing, and the priest wraps her in cloth.

This shrouded creation shrinks, grows, and stretches, until finally turning back into the dead wife. The priest picks her up, then throws the shroud at the prince. Out falls the skeleton, and the prince runs after the priest.

The Monster is an inversion of Méliès’s 1896 trick film The Vanishing Lady, in which a magician’s assistant turns into a skeleton and back again. This was an era in which Egytomania was very much in vogue. 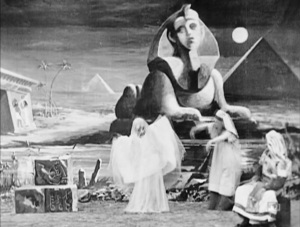 The Infernal Cauldron (Le Chaudron Infernal) is set in the Renaissance, and depicts Satan throwing three people into a cauldron. Each time, flames rise up. Satan’s assistant quells the flames, and the victims’ ghosts rise into the air. The ghosts then burst into dancing flames, and Satan leaps into his own cauldron.

Starting in 1903, Méliès began producing two negatives of each of his films, for domestic and foreign release, to stop the rampant piracy of his films. Towards this purpose, he built a special camera simultaneously using two reels of film and two lenses.

In the early 21st century, researchers discovered this two-lens system was an unintentional stereo film camera. Thus, 3D versions of Méliès’s films could be created by combining the two prints. In 2010, The Infernal Cauldron and The Oracle of Delphi were screened in 3D at Cinémathèque Française, and in 2011, those two films plus The Mysterious Retort (1906) were screened in 3D at the Academy of Motion Picture Arts and Sciences. 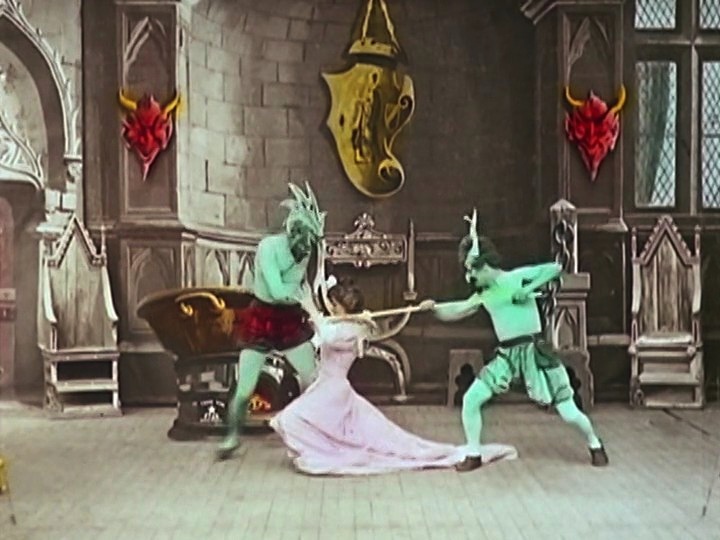 The Oracle of Delphi (L’Oracle de Delphes) is also set in Ancient Egypt. A priest brings a fancy box into a temple and locks the doors. After he leaves, a thief breaks in and steals the box, only to be caught by a strange bearded figure who appears out of thin air.

The bearded man rescues the box and turns the two Sphinxes by the doors into women. They attack the thief, whose head turns into a donkey’s head. After this, they return to statues, the bearded man disappears, and the thief is left stunned.

The Damnation of Faust (Faust aux Enfers), released December 1903, was Méliès’s third film adaptation of this famous story, and wouldn’t be his last. He made one more direct adaptation in 1904, and two other films, in 1906 and 1912, inspired by Faust’s story. The 1903 version was supposedly directly inspired by Hector Berlioz’s 1845 musical La Damnation de Faust.

The film starts with Faust’s descent into Hell with Mephistopheles (Méliès). When they arrive at the Devil’s Hall, Mephistopheles commands goddesses forth from the ground to perform a ballet. Then the dancers vanish, shortly replaced by a cascade of water with maids floating in the air.

Next appears a seven-headed Hydra, which frightens both Faust and Mephistopheles. In turn, this beast is replaced by dancing demons. When they also disappear, Mephistopheles wraps Faust in his cloak, and both disappear into the ground. They arrive in a grotto of fire and flames, and Faust is hurled into a furnace as demons dance.

Mephistopheles rises above the crowd in the form of a bat at the end.

The dancing masked demons’ costumes were reused from an earlier 1903 Méliès film, The Infernal Cake Walk. Like many of his other films, this too makes wonderful use of special effects like substitution splices, dissolves, pyrotechnics, and superimpositions on black backgrounds.