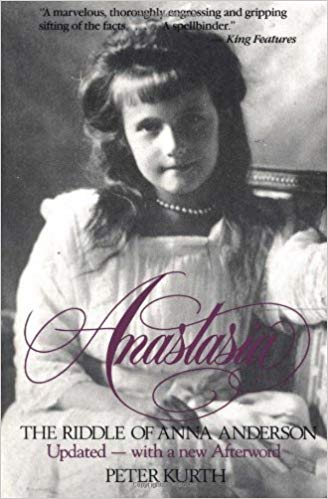 I first read this book in November ’95, shortly before I turned sixteen. I checked it out of the Guilderland Library the day Yitzchak Rabin was assassinated, 4 November. Kurth does such a great job of establishing a case for the claimant as Grand Duchess Anastasiya, it made me into an Anastasian for almost twenty years.

So strong was my belief, I did a research paper arguing her case my junior year of high school. My teacher told me I made a very strong case. This was after the first round of DNA results which disproved her claim, but based on what I’d read, I was positive monkey business had gone down with the chain of custody, and that shady characters with an agenda were behind it.

While I’m not normally into conspiracy theories, Kurth made such a compelling case for her, based on forensic comparisons of ears and faces, handwriting analysis, emotional reactions, and personal memories, I refused to believe this woman could’ve been anyone else, least of all a supposed mere Polish peasant.

Then, in 2007, Anastasiya and Aleksey’s remains were finally discovered and positively identified (and btw, are still being denied a funeral because the Russian Orthodox Church refuses to accept the results of countless DNA tests). Even after that momentous discovery, I still refused to believe the truth!

And then I discovered everything I thought I knew about this case was wrong.

I first read this book in 2015, and was absolutely blown away by all the newly-unearthed evidence not only proving Anna Anderson was indeed Franziska Schanzkowska, but that she couldn’t possibly have been Anastasiya either. Peter Kurth wrote a very good biography of her, but as King and Wilson prove, much of the information which seemed to prove her identity was at best misreported or misrepresented, and at worst outright falsehood.

Much of the widely-available documentation came from people highly sympathetic to her claim, like Harriet von Rathlef-Keilmann; Gleb Botkin and his sister Tatyana; and the von Kleist family. Those who strenuously opposed her claim, and rejected her after meeting her, like former tutor Pierre Gilliard, lady-in-waiting Baroness Sophie Buxhoeveden, and Anastasiya’s aunt Grand Duchess Olga Aleksandrovna, have had some quite nasty things said about them for decades. 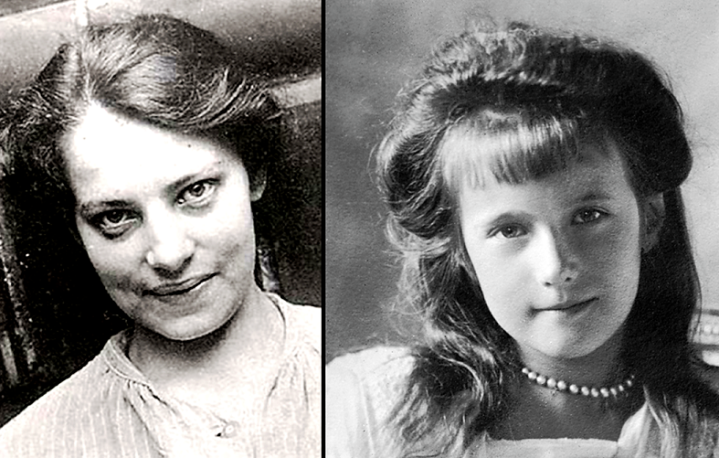 The claimant didn’t look anything like Anastasiya, yet a lot of people believed her facial features had been altered beyond recognition because of traumatic injuries. Select findings from the long-running German legal battle seemed to prove their ears, foreheads, and faces were identical, but there was not only never a consensus, but other forensic examinations had the exact opposite results.

Additionally, a supposedly reversed ear photo which led to negative findings was shown to indeed NOT have been printed in reverse after all. Another supposedly matching ear photo was that of Grand Duchess Mariya.

In short, when examined critically, the forensic evidence, per the most advanced techniques of that era, didn’t exactly make a strong case.

People who knew the real Anastasiya very well, and who met the claimant, all soundly rejected her. These people included her aunts Olga and Irene; her French tutor Gilliard and his wife Shura (Anastasiya’s former nursemaid); her English tutor Sydney Gibbes; a number of former courtiers; Baroness Buxhoeveden; and several extended relatives.

Meanwhile, those who met the claimant and insisted she was Anastasiya had never known the real Anastasiya very well. These included people who only had limited or fleeting interactions with her, like Crown Princess Cecilie of Prussia.

Grand Duke Andrey Vladimirovich, her first-cousin once-removed, may have been the Tsar’s aide-de-camp, but even he admitted he didn’t know her very well. Another cousin, Xenia Leeds (née Princess Kseniya Georgiyevna), only met her eight years into the charade, and likewise hadn’t known the real Anastasiya very well or seen her since childhood.

Additionally, the claimant professed a lot of demonstrably false “memories,” made obvious mistakes, didn’t have nearly the linguistic abilities she was claimed to, showed no reaction to things the real Anastasiya would’ve recognised in a heartbeat, and spun an extremely implausible rescue story.