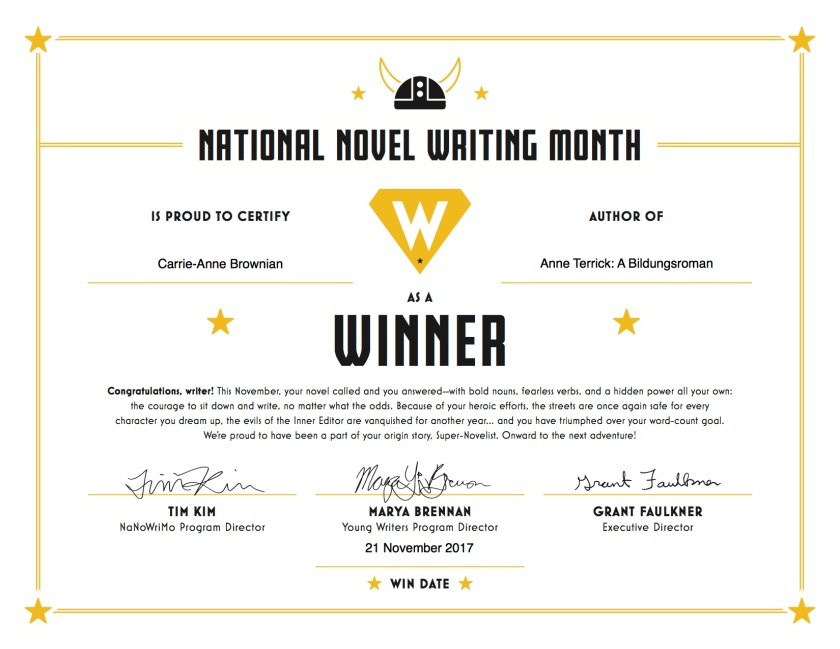 My wordcounts were in the toilet for much of this year. I’m shocked I got just under 81K for NaNo, even as a rebel working on several different things. 47K of that came from my WIP about my long-shelved character Anne Terrick. After about 25 years, it’s very surreal to write an entire book in first-person again, but diary form just feels right for this story.

I managed to get some decent work done on Part II of The Strongest Branches of Uprooted Trees, even if I lost the roughly 2,000–5,000 words closing the penultimate chapter and in the rewrite of the final chapter. Baruch Hashem, I didn’t lost as much as I’d feared, and a number of things came back to me in the ensuing days.

I also have excerpts from those lost words in my Twitter feed, from all the themed weekly writing hops I do. It won’t be the first time I’ve had no choice but to go back from scratch and memory to rewrite and reconstruct something.

Though I waited till four days before the deadline, and almost gave up on the second day, I’m glad I went for it and wrote a story for this year’s IWSG anthology contest. Sci-fi is my next-fave genre, though I don’t give it nearly as much attention as I give historical. It ended up a bit over 5K.

I also got some good work done on my fourth Russian historical, A Dream Deferred: Lyuba and Ivan at University. A lot of great secondary characters and subplots introduced themselves this year. I’ve just had to accept that this volume isn’t one of the ones which has been writing me more than I’ve been writing it, and that it won’t be finished as quickly as normal.

I’m surprised to see I wrote a bit over 90K on Dream Deferred this year. It felt like much less, giving my depression and lagging wordcounts.

I’m now back to working on the book formerly known as The Very First, which I’ll write more about in my January IWSG post. I’d thought I only had to finish up the chapter I’d belatedly added about the 1938 War of the Worlds radio broadcast, but I saw a great opening to add two new chapters concluding the year, and an Epilogue in January 1939, at Barry’s bar mitzvah.

I’ve lost about 30 pounds since June. The weight I’d ballooned up to made my UMass weight look healthy. I still can’t believe I was that heavy and lived, even with my bone structure!

I’m not happy at how I was shanghaied and blocked from moving home to Pittsburgh like I’d been excitedly planning to, but I remain hopeful I’ll be there by the end of 2018 and resuming my master’s program. I know I’ve been out of school for a few years, but I was far from the only student who was very unhappy with UAlbany’s library science program.

My 17-year-old leafy baby, Kalanit, started the year just as depressed as I was. Her leaves were dull and drooping over the sides of her pot, and she hadn’t had any new growths for a few years. After she survived her longest car ride ever, 900 miles, and was put into a new pot for the first time ever, she came back with a vengeance.

Kalanit’s roots had started to become impacted, but a larger pot and fresh soil worked miracles. She grew and grew like crazy, with a new baby almost every time I turned around. I’ll have to have a future post with pictures of Kalanit to show just how amazing her recovery has been.

A lot of people have expressed astonishment when they find out I’ve kept a spider plant alive for 17 years. She’s been on a number of car rides and in a number of residences, including the four different rooms I lived in during my two years at UMass.

Kalanit may soon need a larger pot, and possibly to be split up for the first time in years!