Together with The Bat and The Monster, The Cat and the Canary is one of the Big Three old dark house plays which were made into films during the silent era. Old dark house stories feature people stuck overnight in a strange, creepy, old house. Frequently, the reason for the gathering is the reading of an old eccentric’s will, and there’s at least one murder or mysterious disappearance.

Carl Laemmle, the German-born head of Universal Pictures, invited German Expressionist director Paul Leni to do the honors for The Cat and the Canary after seeing his impressive mixing of comedy and playfulness with the grotesque in Waxworks (Das Wachsfigurenkabinett) (1924). Laemmle also wanted to capitalize upon the Gothic horror film trend.

Leni provided a masterful mixing of German Expressionism and comedy, tailoring that style to American audiences. A hand wiping away cobwebs to reveal the opening credits is just the beginning. Leni also created the trademark Expressionist mood through shadows, lighting, and camera angles.

The film was very financially successful, and has received mostly positive reviews both then and now.

Millionaire Cyrus West, who lives in a decaying old mansion over the Hudson, has been driven crazy by his greedy relatives. He feels like a canary surrounded by cats. To keep them away from his money for as long as possible, he locks his last will and testament in a safe, with instructions to be read on his 20th Jahrzeit (death anniversary).

If and only if the conditions of the will can’t be fulfilled, a second note is to be opened.

Cyrus’s lawyer, Roger Crosby (veteran character actor Tully Marshall), discovers a live moth and the second will when he opens the safe. He asks caretaker Mammy Pleasant who else has been in the house, but she insists she’s been alone for twenty years. Crosby is also the only one who knows the safe’s combination. 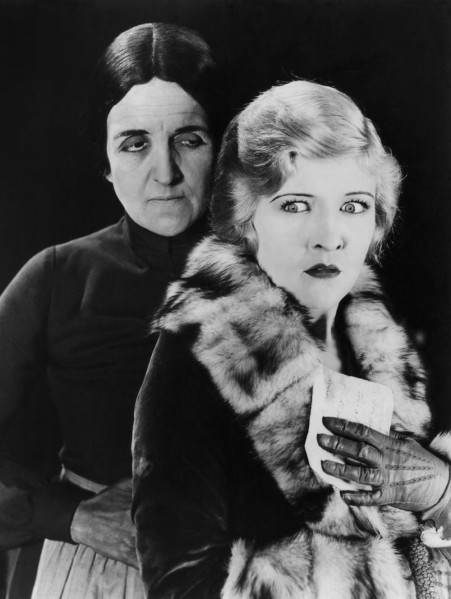 Because Cyrus hated his family so much, he’s given his fortune to Annabelle, his most distant relative. However, before she can inherit anything, she has to be judged sane by a doctor named in the will, who’s due to pay a visit that night. If she doesn’t pass muster, the money goes to the person named in the second will.

Cyrus’s painting falls off the wall, which is interpreted as a very bad omen. Now everyone is even more eager to get out of there, as much as they all want a piece of the fortune. However, they’re prevented from leaving when a guard enters and announces he’s looking for an escaped lunatic, “who thinks he’s a cat, and tears his victims like they were canaries!”

No one wants to sleep alone after this.

Crosby pulls Annabelle aside to read the alternate will, so she’ll know who might be trying to get between her and the inheritance. Before he can read the name, a claw-like hand emerges from a secret panel and absconds with him. When Annabelle tells the others, they all think she’s crazy, except the smitten Paul. 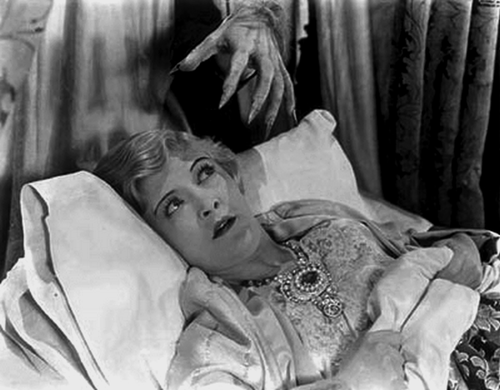 In Cyrus’s room, Annabelle reads a third note, which has instructions for finding the West diamonds. She’s delighted to discover a beautiful diamond necklace, but while she’s sleeping, the clawed hand snatches it. Once again, no one believes her but Paul.

Of the Big Three old dark house films of the Twenties, I like this one best. I’d highly recommend it if you’re a fan of classic horror.