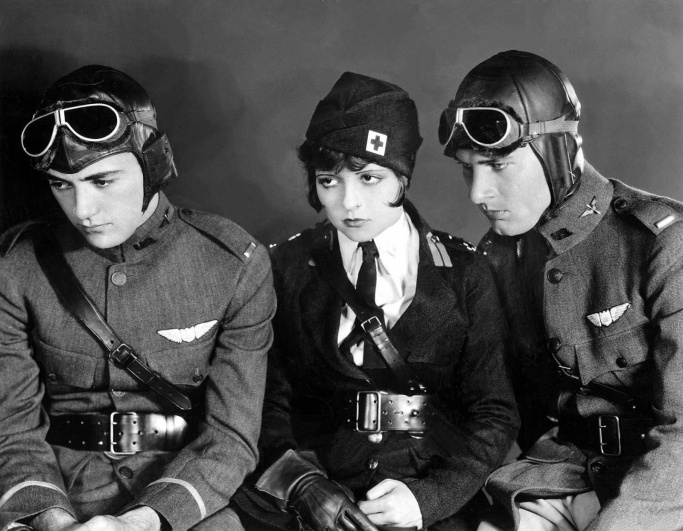 A sneak preview of Wings was held 19 May 1927, at San Antonio’s Texas Theater on Houston Street. (Unlike Manhattan’s Houston Street, the one in San Antonio is pronounced HYOUST-in, not HOUSE-ton!) The official première of 12 August was at NYC’s Criterion Theater. After a most glorious 63 weeks, the film moved to second-run theatres.

The original release was colour-tinted, and several sequences were in Magnascope, an early widescreen process. A few prints had synchronised sound effects and music, via General Electric’s Kinegraphone sound-on-film process. This was a time when a number of films were experimenting with such techniques.

The Handschiegl colour process was used to tint flames and explosions in the original release. This worked by using opaque paint to block out the sections to be coloured, then making a duplicate negative from the painted print. The duplicate was developed in a tanning developer, which kept the blocked areas fairly soft and able to soak up dye.

After dyeing, the duplicate was put into exact contact with a positive print. This transferred the dye to the proper places. The print went through the dye transfer machine several times, contacting a different matrix for each colour. Typically, no more than three colours were used.

Wings was a giant blockbuster, and became the yardstick against which all future aviation films were measured. Its popularity was due in great part to Lindbergh’s recent transatlantic flight, and the overall popularity of aviation during the Twenties.

The combat scenes were so real, some wondered if actual battle footage from WWI had been used. 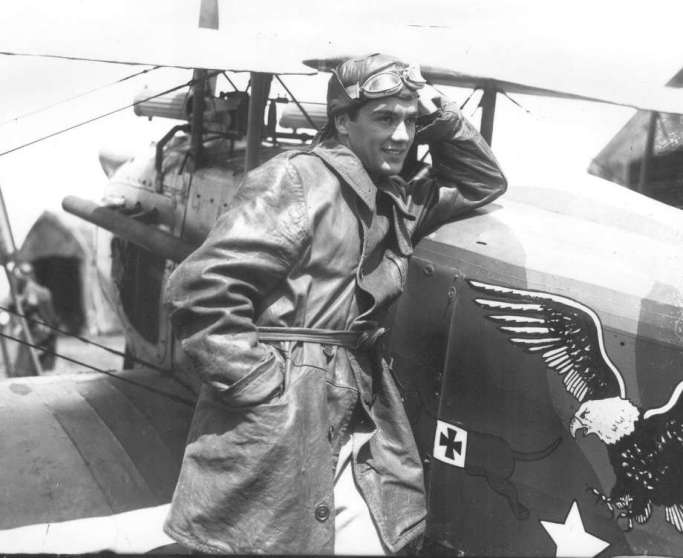 By the very first Academy Awards, 16 May 1929, to honour the films of 1927–28, Wings won Best Picture (then called Outstanding Picture) and Best Engineering Effects. The overrated Sunrise was considered top winner for having taken Unique and Artistic Production, but after that category was dropped the next year, the Academy retroactively declared Wings the top winner.

The handsome Douglas Fairbanks, Sr., gave Clara Bow the Oscar statuette (not yet called an Oscar), on behalf of producers Adolph Zukor and B.P. Schulberg.

Wings was considered a lost film until its miraculous 1992 rediscovery in the Cinémathèque Française archives in Paris. No time was lost in copying the nitrate to safety film stock. Once a nitrate film disintegrates, that’s it. Theda Bara discovered that the hard way when she found all her personal copies of her films turned to dust in her vault.

After its restoration, the film was shown in theatres. Some of these screenings including Wurlitzer pipe organs. On 2 and 16 May 2012, Cinemark theatres had a limited re-release, shown twice daily, to mark its 85th anniversary.

Wings came out on VHS in 1996, and in 2012, coinciding with both the film’s 85th anniversary and Paramount’s centennial, it was issued on DVD and Blu-Ray.

In 1997, it was chosen by the Library of Congress for preservation in the U.S. National Film Registry, for being “culturally, historically, or aesthetically significant.” In 2002, it was preserved by the Academy Film Archive.

In 2006, director William Wellman’s son, William, Jr., wrote a book about the film, The Man and His Wings: William A. Wellman and the Making of the First Best Picture. The film was also the focus of the 9 November 1968 episode of Petticoat Junction, starring Buddy Rogers (Jack) and Richard Arlen (David) as themselves.

Rogers and Arlen also appeared as themselves on the 18 December 1967 episode of The Lucy Show, at a ceremony marking Lucille Ball and Carol Burnett’s graduation from flight assistant training.

Wings was one of the first major non-pornographic films to show nudity, first in the military physical scene, and later with a brief shot of Clara Bow’s breasts in the Paris bedroom scene. Buddy Rogers’s drunkenness during that scene was very real, since at age 22, he’d never had alcohol before, and quickly got tipsy.

Wings was also one of the first major films to show a male-male kiss, albeit one of friendship instead of romance.

3 thoughts on “Wings at 90, Part III (Reception and legacy)”