Image used solely to illustrate the subject for the purposes of an album review, and consistent with Fair Use Doctrine

In honor of John Entwistle’s upcoming 15th Jahrzeit (death anniversary), I decided to review his awesome solo album Too Late the Hero. Some of the material is edited from my old Angelfire posts. Though I own several of his albums on vinyl, this is the only one I’ve gotten around to listening to so far.

TLTH went to #71 on the U.S. Billboard 200, his highest-charting position since his 1971 solo début Smash Your Head Against the Wall. This was also his last album to chart before his untimely death.

The single “Talk Dirty” went to #41 on the U.S. Mainstream Rock chart, with the B-side of “Try Me.” (I’m sure many of my younger readers don’t even know what a B-side is!) The other single, title track “Too Late the Hero,” charted at #76 on the U.K. NME (New Musical Express) chart, and #101 on the U.S. Billboard chart. “Fallen Angel,” while not a single, also received much radio play on album-oriented rock stations. 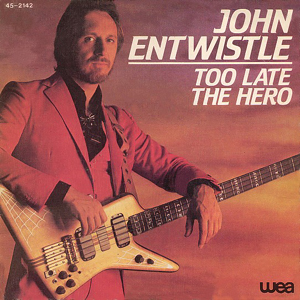 TLTH was John’s first solo album in six years, since 1975’s Mad Dog. He felt he’d been going in the wrong direction musically, and wanted to get away from that old-style rock and roll with its “shoo-bop, shoo-bop” stuff. With this album, John returned to his previous style of songwriting. (Read more in a 1981 Rolling Stone interview.)

Critical reception over the years, both then and now, has typically been rather underwhelming or negative. A rare positive review came from venerable music critic Chris Welch of Melody Maker.

I’ve always absolutely adored this album. It’s pulsing with so much musical energy, and as a proud Eighties kid, I can’t resist that trademark Eighties production style!

It’s been said that John’s voice was never this top-notch again after this period.

Track listing, with stars by the CD reissue bonus tracks:

“Try Me”
“Talk Dirty”
“Lovebird” (so lovely and poignant, with John’s voice sounding particularly pretty)
“Sleeping Man”
“I’m Coming Back” (catchy and upbeat, though veers a bit dangerously close to filler)
“Dancing Master” (claims to not be a disco song, but so obviously is, even if it’s more of a spoof!)
“Fallen Angel” (has some very insightful lyrics about how cynical and fickle people can be towards those who are no longer on top)
“Love Is a Heart Attack” (an eerily prophetic song he played at all his solo shows)
“Too Late the Hero” (so beautiful, epic, and haunting, with John’s voice sounding not only very pretty, but delicate)
“Sleeping Man” (demo)*
“Dancing Master” (demo)*
“I’m Coming Back” (demo)*
“Love Is a Heart Attack” (demo)*
“Overture” (unreleased outtake)*

I’m sorry I waited to long to get this album. There was a $3 or $2 copy at Mystery Train Records in Amherst for quite some time, along with Smash Your Head Against the Wall, but I always hesitated, since I wasn’t enough of an established, longtime, serious Who freak to be ready for solo work. But when I found it for $1 at the (now out of business) Saratoga branch of Last Vestige Records, I hesitated no more.

In spite of the many lacklustre reviews, I’d strongly recommend this album to someone interested in John’s unique solo work. Though he only had eight solo albums, it’s quality that matters, not quantity. Ideally, one should also be well-versed in a solo artist’s band of origin before branching out into solo work.

5 thoughts on ““I wish I could stop, and start it again””