In memory of all those whose lives were lost 78 years ago today on Kristallnacht, and at Babi Yar.

I wanted to do a post marking the 75th anniversary of the massacre by Babi Yar, the largest single massacre of the Shoah up till that date (29–30 September 1941). This was also the largest Einsatzgruppen massacre in the former Soviet Union. For the most part, the Jewish communities in the occupied USSR were murdered by mobile killing squads, not in ghettoes and camps.

Historically, there was a lot of anti-Semitism in this part of Europe, so there were many local collaborators, both active and silent. While there were also heroes, the majority didn’t do anything to help or protest. Pointing out widespread anti-Semitism, with deep historic roots, in certain countries isn’t meant to be a bash against them and their people. All countries have black marks in their pasts. Denying or downplaying it is intellectually dishonest.

This order, posted in Ukrainian, Russian, and German around 26 September 1941, read:

All Yids of the city of Kyiv and its vicinity must appear on Monday, 29 September 1941, by 8 o’clock in the morning at the corner of Melnika and Dokterivskiy Streets (near the cemetery).

Any Yids who do not follow this order and are found elsewhere will be shot.

Any civilians who enter the dwellings left by Yids and appropriate the things in them will be shot. Copyright Markv at nl.wikipedia; Licensed under the GFDL by the author

The decision to murder all of Kyivan Jewry was made by Major-General Kurt Eberhard, the military governor; SS Obergruppenführer Friedrich Jeckeln, police commander for Army Group South; and Otto Rasch, Einsatzgruppe C Commander.

The murder itself was orchestrated by an SS Sonderkommando unit (not to be confused with the Jewish Sonderkommando squad, who carried out a brave revolt on 7 October 1944 and risked their lives to take and smuggle out four clandestine pictures in August 1944). SS and SD police, along with local police, assisted them.

Over 30,000 people dutifully reported, far exceeding the five or six thousand initially expected. They truly believed they’d be resettled. Instead, they were ordered, bit by bit, to leave their valuables and money, give up their luggage, and remove their shoes and each layer of clothes.

Given the size of the crowd, not many people suspected their cruel fate until the last moment, when they heard the machine guns. The ravine they were led to is called Babyn Yar in its native Ukrainian, and Babiy Yar in Russian. The standard English transliteration is Babi Yar, which I’m using for the sake of academic consistency.

In all, 33,771 people were murdered over those two days. Only a small minority were able to escape. At least 29 survivors are known. The only survivor to testify by a 1946 war crimes trial in Kyiv was Dina Mironivna Pronicheva, an actor by the Kyiv Puppet Theatre.

After the September 1941 massacre, the Nazis and their collaborators murdered over 100,000 other Kyivans by Babi Yar, right up until the Nazis were forced to retreat. They murdered political dissidents, Roma, POWs, and many other civilians. Patients of the Ivan Pavlov Psychiatric Hospital had their ashes dumped into the ravine after being gassed.

A concentration-camp, Syretskyy, was established a few hundred meters from the ravine in 1942, as a subcamp of Sachsenhausen. While the inmates were being forced to cover up traces of the mass grave in August and September 1943, they got hold of tools like screwdrivers, hammers, keys, and pieces of metal.

On the second anniversary of the first massacre, 29 September 1943, the prisoners revolted as the camp was dismantled. They overpowered the guards, and fifteen prisoners escaped. Sadly, the other 311 inmates were murdered once the Nazis regained control. 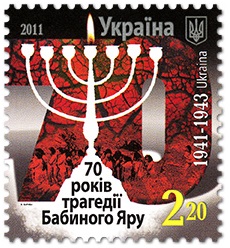 Ukrainian postage stamp issued for the 70th anniversary in 2011

Some of the souls lost are pictured below. Unless otherwise noted, they were all murdered by the first, largest massacre.

Mariya (Manya) Iosifivna Halef in 1936. She was seven when she was murdered.

Mykhailo Pavlovych Teliha, her husband, 8/21 November 1900–21 February 1942. He played the bandura (a Ukrainian instrument like a zither crossed with a lute) professionally. Rather than take his freedom, he chose to stay with his wife.

Ivan Andriyovych Rohach (29 May 1913–21 February 1942), a prominent poet, writer, political activist, and journalist. He was murdered with his sister Hanna and the entire staff of his newspaper.

Yevgeniy Aleksandrovich Yevtushenko’s 1961 poem “Babi Yar” famously begins: “No monument stands over Babi Yar.” It wasn’t until 1976 that a monument was finally erected, only mentioning POWs and Soviet citizens. In 1991, a Jewish memorial finally appeared. Today, many other memorials dot the area.

7 thoughts on ““One long soundless scream””