If you celebrate Sh’mini Atzeret and Simchat Torah, may you have a lovely holiday! 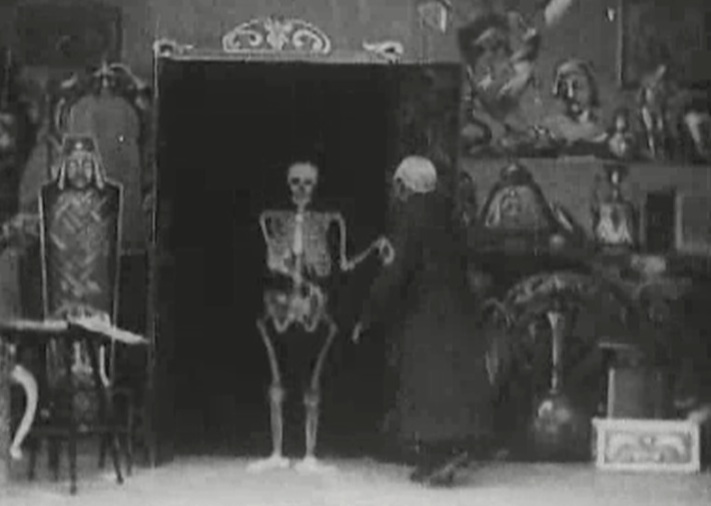 The Haunted Curiosity Shop, released in the U.K. in 1901, is now 115 years old. This great-granddaddy of horror was directed by Walter R. Booth, a pioneer of British cinema. Just like his French counterpart Georges Méliès, he too was a magician before turning to filmmaking. He worked with Robert W. Paul and Charles Urban, also pioneers of British cinema.

At just shy of two minutes, the film is very simple. An old man who runs a curiosity shop is beguiled by all manner of spooky tricks and apparitions, including a floating skull; a magically and gradually materializing girl who transmogrifies into an old woman and back again; a mummy; a skeleton; and a giant head growing ever larger.

The Merry Frolics of Satan, released in France as Les Quatre Cents Farces du Diable (The 400 Tricks of the Devil), came out in 1906, and is now 110 years old. The film was directed by none other than the legendary Georges Méliès, who also stars as Mephistopheles.

The film, described by Méliès as a grande pièce fantastique in 35 scenes, is a contemporary, comedic adaptation of the Faust legend. It draws upon a stage play, Les Quatre Cents Coups du Diable, which débuted 23 December 1905 by the Théâtre du Châtelet in Paris.

That 1905 play was in turn based upon Les Pilules du Diable, which premièred 16 February 1839 by the Théâtre National de Cirque-Olympique in Paris. Both of these plays were féeries, a uniquely French theatrical genre with fantasy plots, lavish scenery, incredible visuals, and mechanical stage effects.

William Crackford, an English inventor and engineer, is in his workshop when he gets visited by a messenger who breaks the news that Alcofrisbas, a famous alchemist, wants to sell him a very powerful talisman. Intrigued, Crackford and his servant John travel to Alcofrisbas’s lab, where a lot of magical tricks transpire.

Crackford and John say they’re planning a high-speed trip around the world, and Alcofrisbas guarantees his help. Seven assistants march out, and help him with making a lot of magical pills. When a pill is thrown onto the ground, any wish will be granted.

Crackford is so excited by these pills, he doesn’t read the fine print on the contract he signs, and thus has no idea he’s sold his soul to the Devil. After Crackford and John depart, Alcofrisbas transforms back into his true identity: Mephistopheles. The assistants are the Seven Deadly Sins.

When Crackford comes home, he doesn’t waste a moment in commencing his preparations for the journey, and shows off the pills to his wife and daughters. He produces a trunk out of which two servants climb. This trunk becomes a Matryoshka doll, with more and more trunks and servants, until finally the trunks turn into a miniature train.

The train, loaded with Crackford’s family and luggage, begins its journey, and is met with ridicule instead of fanfare. A little accident on a bridge threatens to derail the entire journey, but Crackford won’t be deterred, and continues on with John.

They stop by an inn, at which a disguised Mephistopheles is the proprietor. More magic tricks and sorcery commence, until finally Crackford and John run out and make their escape with a strange horse and buggy. Mephistopheles follows them in a car, and there’s another accident with a live volcano.

The carriage continues its journey through outer space, until a thunderstorm sends the travellers plummeting earthward, right into a dining room. Crackford is about to finally have some dinner when Mephistopheles arrives, demanding Crackford fulfill the contract’s terms.

Sorry this soundtrack isn’t entirely appropriate (annoying background laughter and sound effects), but this was the only video I could find with any musical accompaniment. This also lacks the voice-over narration which was part of many Méliès films and took the place of intertitles.

7 thoughts on “A twofer of antique horror”