Going along with Wednesday’s post and the onomastic plans of some of the characters in my WIP (to be fully realized in the companion book which follows the characters who immigrate to Israel instead of the U.S.), I thought I’d do a post about the Hebraization of names. Future installments in this series will cover Italian, Breton, Irish, Armenian, Finnish, Yiddish, Greek, Swahili, Japanese, Arabic, Chinese, and Korean names. When I’m fairly sure there won’t be any further installments, I’ll turn this series into a book, with expanded name lists and commentaries.

Hebraizing a name obviously entails changing one’s given name into a Hebrew equivalent, or adopting a new name entirely. This practice began during the First Wave of Aliyah (1882–1903), and became widespread during the Second Wave (1904–14). It continued during the Third Wave (1919–23), Fourth Wave (1924–8), and Fifth Wave (1929–39). Many Shoah survivors who came to Israel after 1945 also were eager to change their names.

First Committee of the Hebrew Language, 1912. Eliezer Ben-Yehuda, father of the modern Hebrew language, is on the far right in the front row.

Long story short, Hebrew began to be revived during the First Wave, and during the Second Wave, it broke out of the school and home settings to be used in public venues. This is the only language in all of history to be resurrected in this way. Sure there are plenty of folks who know languages like Latin, Sanskrit, and Ancient Greek, but those aren’t national languages, nor did they go from languages without any native speakers to languages with millions of native speakers.

Part of the resurrection of Hebrew included the adoption of empowered new names, and throwing off old names smacking of the shtetl and an oppressed people without their own homeland. Hebrew, not Yiddish, is our lingua franca, as sorry as I am that Yiddish has become an endangered language.

The resurrection of Hebrew went hand-in-hand with the Hebraization of surnames. There were several styles of doing this:

Translating your birth surname into Hebrew, or giving it a Hebrew twist; e.g., Lebovitz could become Lev; Bergman translates into Harari; Abramowicz becomes Ben Avraham; Rozental is shortened to Rosen; Davidovics is shortened to Davidi; Berg is switched to Barak; Rosen becomes Vardi; Goldberg is Har-Paz. 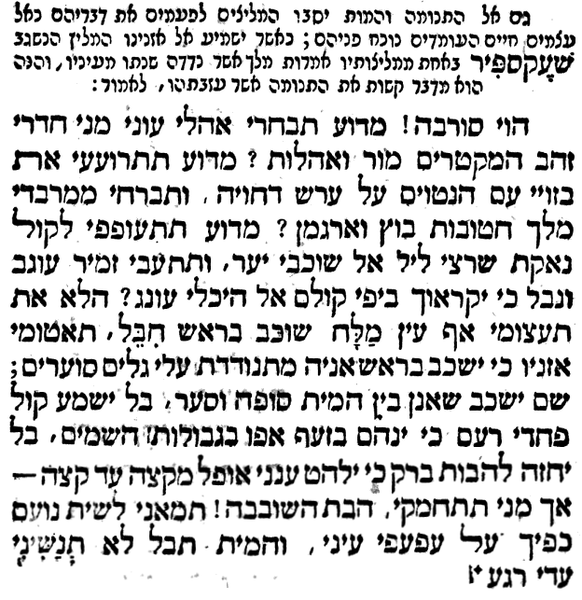 First known Hebrew translation of Shakespeare, 1818, Solomon Löwisohn, “Are at this hour asleep!… Uneasy lies the head that wears a crown” monologue from Henry IV

Though Hebraization was all but legally mandatory for many decades (so much so many Sephardic and Mizrachic children were given new surnames in school, without their parents’ knowledge), not everyone supported it. Many people were proud of their surnames and the long histories or famous bearers they represented, such as Sasson, Rothschild, Einstein, Abrabanel, LaPaz, Sasportas, and Saadia.

Others retained names denoting membership in the priestly or Levitical castes, like Kahan, Katz, Levine, Levinsohn, Azoulai, and Kaganovits. A number of Sephardic surnames were Hebrew to begin with. Still others couldn’t bear the thought of erasing their birth names as though they’d never been, effectively severing their entire family history and starting over with an alien identity.

Today, the trend towards Hebraization has not only significantly slowed, but also been reversed. Many new immigrants in recent decades have kept their original names, and many people with long roots in Israel have taken back ancestral names to feel closer to their particular ethnic origins.

Would you change your name (in part or full) if you moved to a country with another language? Do you agree or disagree with how many immigrants in the past (to Israel, the U.S., Canada, the U.K., France, Australia, etc.) changed their names to try to better blend in with the host culture? Are there any altered names in your own family tree?

5 thoughts on “A primer on Hebraizing names”