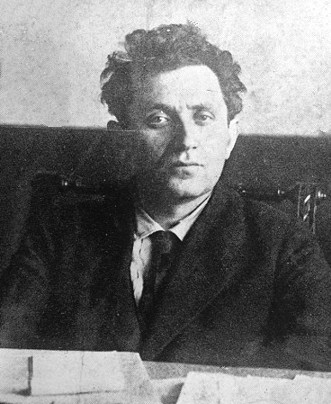 Grigoriy Ye. Zinovyev was born to Jewish dairy farmers in Yelisavetgrad, Ukraine (now Kirovohrad). From 1923–35, the city was renamed Zinovyevsk in his honour. In his early life, he adopted several monikers, before finally settling on the name Grigoriy Zinovyev. He studied history, literature, and philosophy, which perhaps led to his ultimate interest in politics. In 1901, he joined the Russian Social Democratic Workers’ Party, and joined the Bolshevik branch of the party after its 1903 inception.

Zinovyev quickly became one of the leading lights of the Bolshevik movement and one of Vladimir Ilyich Ulyanov (Lenin)’s closest associates. He spent the first three years of the Great War in Switzerland, and returned to Russia on the same sealed train as Lenin in April 1917. However, he opposed Lenin’s call for an armed uprising against the Provisional Government, and they had a falling-out.

After the October Revolution which put the Bolsheviks in power, he continued making himself unpopular with Lenin. He and Lev Borisovich Kamenev wanted to negotiate with Vikzhel (the All-Russian Executive Committee of the Union of Railwaymen). Vikzhel threatened a national strike unless the Bolsheviks shared power with other Socialist parties and kicked Lenin and Trotskiy out of the government. Negotiations began, but Lenin ultimately succeeded in stopping them. In response, Zinovyev, Kamenev, and several others resigned from the Central Committee. Lenin never forgot or forgave, even in his Last Will and Testament.

Zinovyev’s political career wasn’t over, however, and he was elected to the Central Committee at the 7th Party Congress in March 1918. He also became a member of the Politburo and Chairman of the Executive Committee of the Comintern. Though he enjoyed great power through most of the 1920s, he ultimately was targeted by Stalin, put through show trials in 1935 and 1936, and murdered on 25 August 1936. Kamenev was also a victim of these show trials. They were taken to the Donskoy Crematorium, and their ashes dumped into pits.

In my alternative history, Zinovyev is thrown into prison along with all the other Bolsheviks following the restoration of the monarchy and Grand Duke Mikhail declaring martial law. In August 1929, when Aleksey finally comes to the throne in his own right, he discovers his uncle’s last will and testament demands Ulyanov, Trotskiy, Zinovyev, Kamenev, and Dzhugashvili (Stalin) be hanged publicly.

From all newspaper accounts, the first four have become model prisoners over the last eleven years. It doesn’t seem fair to have them suddenly hanged so much time later, and Aleksey not only has them pardoned, but has them taken to the Aleksandr Palace for a private (but guarded) meeting. He explains he’s about to grant a constitution, and wants them to serve in his government.

Courtesy of State Museum of Political History of Russia

During all the time he’s had to prepare for coming to the throne in his own right, Aleksey has done a lot of reading and research, determined to find out why his parents were overthrown, what made people hate his family so much, and what drove people to Bolshevism. He’s gained a greater understanding of what went wrong, and how many of these people were initially motivated by understandable reasons. If only there’d been a more understanding Tsar and the kinds of reforms they desperately sought, they wouldn’t have done the half of what they did. They weren’t born evil, and they’re far from unintelligent. Zinovyev becomes the Minister of Education, a role in which he shines, and helps to bring many much-needed reforms to the Russian Empire.

At the end of Part IV, 13-year-old Grand Duke Nikolay (Kolya), named for the grandfather he’ll never know, asks his father why he did it. Aleksey says he was motivated by love, sympathy, empathy, and forgiveness. He could’ve chosen to hate and become a ruthless autocrat in response to what happened, but instead, he chose to understand what motivated them, to see them as fellow humans made in the image of God, and to rule with love and understanding.

Ultimately, Zinovyev and the others weren’t beyond forgiveness. All they needed was a Tsar who ruled with love in his heart, who saw his subjects as his friends, not impersonal masses. As Lao-Tzu said, “Sometimes the softest thing in the Universe/Can overcome the hardest thing in the Universe.” And as the final three intertitles of Faust say:

Tell me the word!