Ipatyev House, prior to its destruction

Yekaterinburg, Russia’s fourth-largest city, straddles the border between Europe and Asia. It was founded in 1723 by Vasiliy Nikitich Tatishchev and Georg Wilhelm de Gennin, and named after Peter the Great’s second wife, Yekaterina (Catherine) I. In 1796, it received town status. From 1924–91, it was renamed Sverdlovsk, after Bolshevik leader Yakov Mikhaylovich Sverdlov. 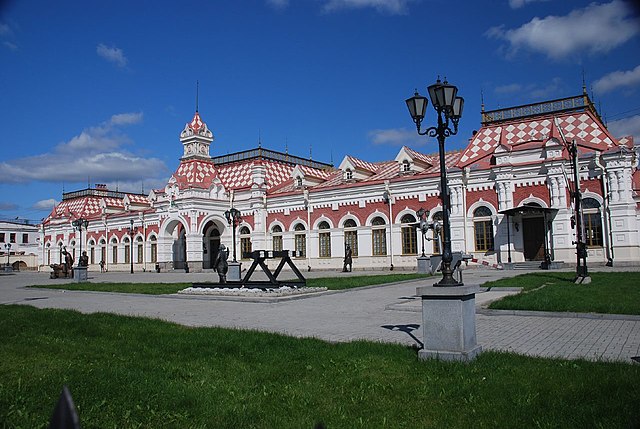 Yekaterinburg grew to become a leading industrial centre of the Urals, with its rich deposits of natural resources. It also became a vital part of the development of the Urals as a whole, and an extremely important trade route. Its nickname is “The Window on Asia.”

Because of its dizzying development and importance on the trade route, it attracted a fair amount of people with money. The city was fast becoming even more important to the Russian Empire during the Great War, but alas, everything changed when the Bolsheviks took over. After they conquered the city, they imprisoned, murdered, or chased away anyone from the upper- and middle-classes, and took all the money and natural resources for themselves.

With all these riches in the hands of a very few, the people of Yekaterinburg suffered greatly. In 1918, a famine broke out, and many people risked their lives to go to nearby towns and villages for decent food. This wasn’t easy, since this was also a period of insane hyperinflation and rationing. The working-class and poor, whom the Bolsheviks supposedly loved so much, were even worse-off than ever before.

Yekaterinburg is the setting of the first six chapters of my alternative history, and later on, during Part IV, the four Imperial children of the new generation are sent to their surviving grandparents in Yekaterinburg ahead of the Nazis reaching St. Petersburg. The new Tsaritsa, Arkadiya, was born in Yekaterinburg in 1897.

In the West, Yekaterinburg is best-known as the place where Russia’s last Imperial Family were imprisoned and murdered in 1918. They were held at a former mansion, whose final owner was Nikolay Nikolayevich Ipatyev. In late April 1918, he was ordered to leave his house, and it was renamed “The House of Special Purpose.”

In the 1930s, Yekaterinburg became a centre of industry once more, and during the Great Patriotic War, many factories and technical schools were relocated there. In order to escape the Nazis, many people fled to the safety of Siberia, where the enemy could never reach them. Many of the collections of the Hermitage Museum were also relocated there.

The city has become a mecca of culture in the Urals, with dozens of libraries, many famous theatres, a philharmonic orchestra, over 30 museums, a circus, unusual monuments (such as the Keyboard Monument), and a recording studio.

The city is surrounded by lakes and wooded hills. Very similar to Upstate New York, their winter lasts from October till mid-April. It’s not unheard of for winter temperatures to dip below zero. Summer only lasts about 65–70 days, with an average temperature of 64º F (18º C). Since it’s behind a mountain range, the temperature is nothing if not consistent in its inconsistency (just like Albany, NY).

In 1977, Ipatyev House was ordered razed by Boris Nikolayevich Yeltsin (whom I have very mixed feelings about, but ultimately feel was a decent person). He didn’t want it to become a rallying-point for monarchists, but people continued to come anyway. (The Russian Orthodox Church has never made a secret of its desire for a restoration of the monarchy, something I also would support.) In 2003, construction of a church in that spot was completed. The altar is right over the spot where the Imperial Family were murdered.

Church on the Blood, built over the razed Ipatyev House, Copyright A viento