Nevskiy Prospekt, the main thoroughfare of St. Petersburg, could perhaps be compared to Fifth Avenue in Manhattan, the Champs-Elysées in Paris, and Unter den Linden in Berlin. Even today, it’s where the majority of the city’s shopping and nightlife are located. The famous street, which runs three and a half miles from the edge of the Neva River to the Aleksandr Nevskiy Monastery, pulsated with even more life in Tsarist days.

Nevskiy Prospekt was like Iverskaya Chapel, teeming with people from all walks of life. Members of the Imperial Family could promenade alongside outlaws, prostitutes, starving artists, murderers, factory-workers, soldiers, and sailors. No matter what time of year, the street was always packed with traffic, be it sleds, automobiles, trams, troikas, landaus, carriages, bicycles, or coaches. It wasn’t unusual to see the mingling of long-haired, dark-frocked priests; peasant women with scarves over their heads; high-ranking officers in their dress uniforms; and high-society ladies draped in ermines, silks, and diamonds.

Some of the most famous buildings on Nevskiy Prospekt include The Passage, a venerable old department store; the Aleksandr Nevskiy Monastery, containing the Theological Academy of the Russian Orthodox Church and several cemeteries; Aleksandrinskiy Theatre; Stroganov Palace; Yeliseyev Brothers, an emporium; a dozen churches of various denominations; Gostiny Dvor, an arcaded bazaar; many hotels; bookstores; Gambs Brothers, which sold housewares; the Russian National Library; and Chicherin House, which went through many uses.

The Admiralty, which housed the Ministry of the Navy, was at the northern end of Nevskiy Prospekt. Anichkov Bridge runs over Fontanka Canal.  Each corner of the bridge contains a rearing bronze horse held by a groom. Legend has it that sculptor Peter von Klodt was so angry over Tsar Nicholas I’s demands and how he gave several first casts to his brother-in-law, he retaliated by depicting the Tsar’s features in the swollen groin vein of one of the horses.

St. Petersburg was a quite international, not-very-Russian city in Tsarist days. The city was largely designed by foreign architects; the court spoke English, French, and German better than Russian until fairly late in the Imperial era; quite a few members of the Imperial Family used English and French forms of their names; many foreign languages could be heard along Nevskiy Prospekt; and many magazines and books sold along Nevskiy Prospekt were in a veritable cornucopia of languages. Many store windows displayed signs advertising which languages were spoken there.

Maslenitsa (Butter Week), which corresponds to Carnival and falls eight weeks before Easter, was also celebrated along Nevskiy Prospekt. There were many stalls selling blini and blinchiki (small, thin, dessert-like pancakes) soaked in butter, along with other festival foods and products such as roasted nuts, hot drinks, live birds, puppets, gingerbread, satin ribbons, jewelry, and bright, elaborate fabrics and wooden toys.

From 1918–44, it was renamed Proletkult Street, and then changed to Avenue of the 25th of October. Today, the original name has been restored. Obviously, the name is taken from the Neva River, which also gave its name to Russia’s greatest national hero, Prince Aleksandr Yaroslavovich Nevskiy. 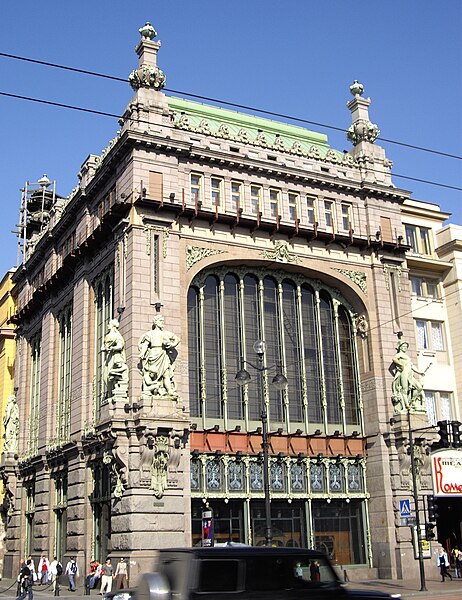 Nevskiy Prospekt features in my alternative history, and will also feature in both of my Russian novel prequels (1889–97 and 1897–1917). The first prequel will open on Nevskiy Prospekt in December 1889, as young sisters Yekaterina and Margarita Iosifovna Gammerova (Lyuba’s mother and aunt) window-shop and daydream about all the things they’ll never be able to buy.