The Grand Cathedral of the Winter Palace, as painted by Eduard Hau

The beautiful cathedral of the Winter Palace was built from 1753–63, consecrated in 1763, and the site of all Imperial weddings. There were many beautiful churches in the various palaces in Tsarskoye Selo and its environs, but only one grand enough to celebrate the weddings of the Imperial Family. In 1837, a fire broke out in the Winter Palace, and architect Vasiliy Petrovich Stasov was pressed into commission to rebuild the cathedral. Along with the Jordan Staircase, the cathedral was one of the few places in the palace to retain its original rococo decoration scheme.

The wedding of Tsar Nicholas II and Princess Alix of Hesse and by Rhine (November 1894), as painted by Laurits Tuxen. In real life, this was the final Imperial wedding held in the cathedral.

The cathedral has three distinct areas, divided by Corinthian columns and pilasters, with large windows on opposite sides and a big central dome. The walls contain gilded stucco in the abovementioned rococo design, which had originally been devised by pre-fire architect Francesco Bartolomeo Rastrelli. The ceiling depicts Jesus’s ascension into heaven, while the lunettes underneath the dome depict Saints John, Matthew, Luke, and Mark. After its restoration was complete, the cathedral was reconsecrated on 25 March 1839. Until the Revolution, this served as the Imperial Family’s primary house of worship.

The cathedral was closed to worship in May 1918, and today serves as an exhibit hall of the Hermitage Museum. It hasn’t been reconsecrated, sadly. 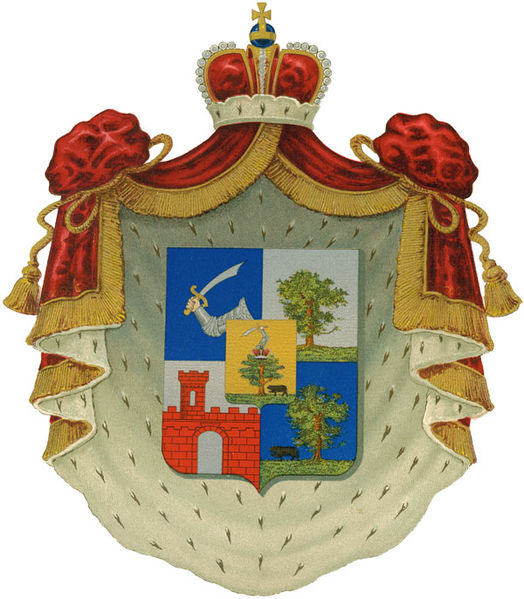 Coat of arms of the House of Gagarin, Copyright Janvhei

In my alternative history, the unlikely Tsaritsa, Arkadiya, is a morganatic princess from the House of Gagarin, born in 1897 in Yekaterinburg. Her father, Mikhail, is a prince by birth, but her mother is a commoner. This princely family claims descent from Prince Vladimir the Great (ca. 958–15 July 1015), the ruler of Kyivan Rus from 980–1015 and now a saint. He’s the special patron saint of the Konev family in my Russian historicals.

The House of Prince Gagarin on Novinskiy Boulevard in Moskvá, one of the family’s mansions from 1817 until the Revolution. It was destroyed by the Luftwaffe in 1941.

In reward for the family’s service to the Motherland, they received fiefdoms, Orders, and numerous other tokens of gratitude. They had many estates, mansions, and palaces all over the Russian Empire.