Batumi is the majority setting of the last chapter of Part III of my alternative history. In June of 1931, the still fairly newlywed Imperial couple finally gets to take a honeymoon, and they choose Batumi for its beautiful warm climate. Also along on the trip is the new Tsesarevich, Yaroslav, called Yarik. The honeymoon couldn’t immediately follow the December 1929 Imperial wedding because of the upcoming Christmas season, the new Tsaritsa’s pregnancy, and the coronation.

Arkadiya, the Tsaritsa, loves Batumi so much, she begs to have a summer home there, and Aleksey agrees to ask some of the palace architects to design a palace there. Even if this new Russia has become a constitutional monarchy, the enlightened new ruling couple have earned the right to enjoy some luxuries.

Batumi is a popular resort town on the Black Sea, and the capital of the autonomous Adjara Province. The earliest evidence of settlement dates from the 8th or 7th century BCE, and it’s believed the Greeks had a colony there. Batumi was also the site of a Roman military fort during Hadrian’s reign (117–138 CE). After antiquity, the city wasn’t mentioned in the records again until the 15th century.

Port of Batumi, as painted in 1881 by Lev Feliksovich Lagorio

Batumi was fought over by the Ottomans and its own Georgians for awhile, until it finally fell under Ottoman rule for the long haul on 13 December 1614. The city was renamed Batoum and made the centre of a sanjak (administrative division). During the Russo–Turkish War of 1828–29, the Ottomans held onto their conquest, and repelled the Russian forces. The Ottomans also initially repelled their enemies during the Russo–Turkish War of 1877–78, but they were finally defeated, and the Treaty of San Stefano and the final act of the Congress of Berlin in 1878 gave Batumi and several other places in Georgia to the Russian Empire. However, Batumi was ordered to have a free port, and a naval station, arsenal, and fortifications were forbidden. This lasted only till 1886. 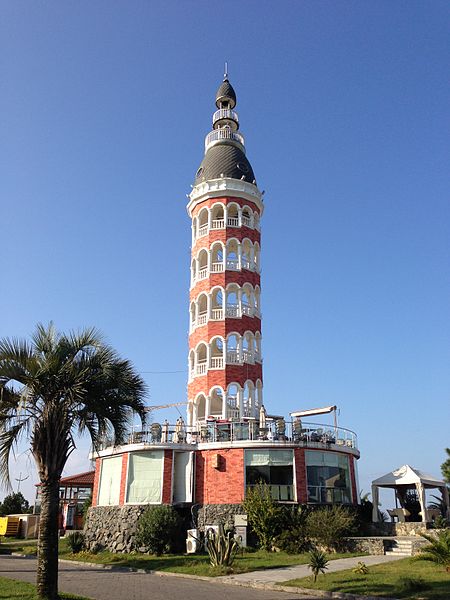 Batumi received city status on 28 April 1888. During this period of the late 19th and early 20th centuries, the city finally began expanding and modernising, with a railroad, oil pipeline, and new industries. The population massively increased in response. The Russian Social Democratic Workers’ Party was also highly active during this era, with many strikes and protests led by Ioseb Dzhugashvili (who wasn’t yet styling himself as Stalin).

During World War I, the Russian Civil War, and the early Soviet period, Batumi passed in and out of Ottoman, British, and Russian hands, as well as enjoying being ruled by its own people for the first time in a very long time. Sadly, Georgia’s hard-won independence came to a premature end in 1921. Under the Soviet heel, nationalism, religion, and everything else relating to Georgian peoplehood were outlawed. The Great Terror of 1936–38 was particularly brutal.

Batumi skyline from the port, Copyright Peter in s

Today, the city is once again free and under Georgian rule. The modern cityscape boasts a number of novelty buildings, such as the White Restaurant, which looks like an upside-down White House; a Sheraton Hotel made to look like the Great Lighthouse of Alexandria; and buildings made to look like the Acropolis and a lighthouse. Other attractions include historic houses of worship, a dolphinarium, an aquarium, the Adjara State Museum, an archaeological museum, and a botanical garden.

Since Batumi has a subtropical climate, some of its primary agricultural products include tea and citrus fruits. However, most of the city’s economy comes from tourism.