Warning: Any hateful, threatening, abusive comments will be deleted and the commenters blacklisted. Go to YouTube, Reddit, and Tumblr if you can’t deal with honest concerns about the very troublesome direction of contemporary transactivist politics. Seriously, these things weren’t happening as recently as 10 years ago. Normal, reasonable voices have been drowned out by a bunch of kneejerk, keyboard warrior zealots.

I do believe there’s a legitimate, TINY minority of people who truly suffer from such severe gender identity disorder (now officially termed gender dysphoria), for whom medical and surgical transition is useful and therapeutic if years of psychiatric counseling don’t take away these feelings. Such people used to be less than 1% of the population, but now we’re seeing news story after news story about younger and younger kids who are allegedly trans. I’ve even heard 3% of all teens in San Francisco high schools now identify as trans.

There is ZERO evidence of transsexual children in history. Just to give a few examples, diabetes and cancer were known about and described as far back as Ancient Egypt, hemophilia was first identified and described in the 10th century during the Golden Age of Islam, and the first well-documented case of a probable autistic child was in the 18th century. There’s extensive, obvious evidence of left-handers and gay people throughout history, even if we see far more visibility in the modern era. Aspies and autistics are also better-diagnosed, instead of locked away in loonybins or viewed as eccentric.

So where’s the evidence of a plethora of transsexuals prior to the modern era? Don’t you think any doctor or psychologist would’ve loved to attach his (or her) name to a new disorder and write all about it? They would’ve observed such behavior centuries ago and used pseudoscientific explanations like frigid mothers, humoral imbalance, or evil spirits. Where are all the reports in old medical manuscripts, old literature, or vintage diaries of little boys screaming when they started wearing breeches or girls insisting they go by male names?

What we DO have evidence of are long histories of third genders in many cultures. For example, the Hijira of India, Two Spirits of various indigenous cultures in North America, Sworn Virgins of the Balkans, the Waria of Indonesia, and the Fa’afafine of Samoa. There’s also a long history of cross-dressing. The first sex change operations and cross-sex hormones were actually used as attempted “conversion therapy” for gay men, justified by a pseudoscientific misunderstanding of gender expression and sexual orientation. Iran now pressures gay people into getting sex changes for those very reasons. 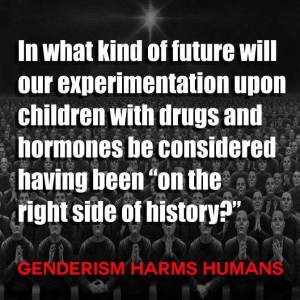 This really concerns me because I’ve always been rather gender-nonconforming. My physical presentation has always been obviously feminine (albeit never girly-girl), but so many of my interests, thoughts, and behaviors have always been more stereotypically guy-like. I’m positive my parents would’ve been pressured to take me to some gender therapist had I been born 5–10 years ago, or that I might’ve erroneously decided I had to be trans based on binge-watching YouTube videos, reading Tumblr blogs, and asking questions on Reddit.

I’ve never felt female or male. I just feel like myself, someone who happens to have more stereotypically masculine than feminine attributes according to what modern Western culture has decided is male vs. female. Why should I identify myself as agender, genderqueer, genderfluid, or a man trapped in a woman’s body just because I never had a Barbie, wouldn’t be caught dead in a frilly Little Bo Peep dress, rarely wear makeup besides nailpolish, only wear block and wedge heels instead of stilettos, love the Three Stooges, enjoy taking stuff apart and fixing it, love creepy-crawlies instead of running away screaming, amn’t afraid of getting dirty, and have long felt most attracted to feminine men?

Studies show about 80% of gender-nonconforming children eventually grow out of it. Many turn out to be gay or bisexual, though some are heterosexual, as I am (albeit more on the demisexual side of the spectrum). I didn’t start to like shopping for clothes till I was about 26, and it was a few years more before I started adding a handful of pink things to my wardrobe! It just means real people aren’t a collection of stereotypes.