Welcome back to Weekend Writing Warriors and Snippet Sunday, weekly Sunday hops where writers share 8–10 sentences from a book or WIP. This week’s snippet comes right after last week’s, as the engagement photography session proceeds. Arkadiya no longer objects to posing in a short-sleeved down which shows the burn scars on her arms.

The photographer originally suggested Arkadiya stand instead of sit so as not to exaggerate the height difference, but that won’t do for His Majesty.

One of the engagement photos of Aleksey’s paternal grandmother, Princess Dagmar of Denmark (known as Minnie), and her first fiancé, Tsesarevich Nikolay Aleksandrovich (Nixa). Sadly, Nixa died of meningitis at age 21, and Minnie ended up marrying his younger brother Sasha.

He motioned to the divan. “Please, sit beside me.  I don’t care if the height difference looks exaggerated.  God made me very tall, and made you somewhat shorter.”

Arkadiya had a seat to his left, assuming a serious expression for the camera.  She’d studied the engagement photographs of the last few Imperial couples, and they all looked appropriately formal and serious.  What she wasn’t expecting was for the Emperor to suddenly put his arm around her and pull her in right up against him, nor to reach over and take her left hand in his right hand.  Her heart beat a little faster at being so close to him.  He had a very masculine scent, and his physique felt better-developed than Arkadiya would’ve expected from someone with a hereditary disease.  Perhaps he had a stronger constitution than his hemophiliac cousins, or he’d found the secret of being physically active without unnecessarily risking his life. 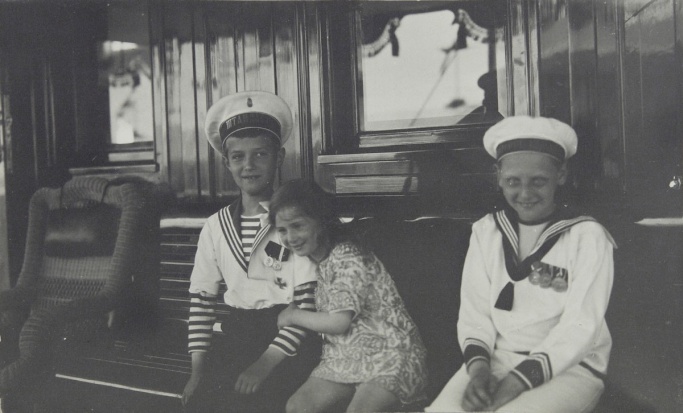 Aleksey and his double-second-cousins Princess Ileana and Prince Nicolae of Romania in 1914. Many people speculate Aleksey and Ileana may have married in real life.

Aleksey had grown to somewhere between 5’5 and 5’8 by the end of his life, though it seems most likely he was on the tallest side of that spectrum, given photographic evidence of how tall he was getting in the first year of captivity. He possibly was even taller than his 5’7 father, and shaping up to be over six feet tall like most of the men on his father’s side of the family.