Welcome back to Weekend Writing Warriors and Snippet Sunday, weekly Sunday hops where writers share 8–10 sentences from a book or WIP. This scene comes right after last week’s, as antagonistic houseguest Urma Smart is horrified to see the beaten-up manger scene her hosts see fit to proudly display under their Christmas tree. Though the Filliards had plenty of money before the Stock Market crashed, and could therefore just as likely have a really beautiful, upscale crèche, I chose to model theirs after an old, beaten-up crèche I’m familiar with. 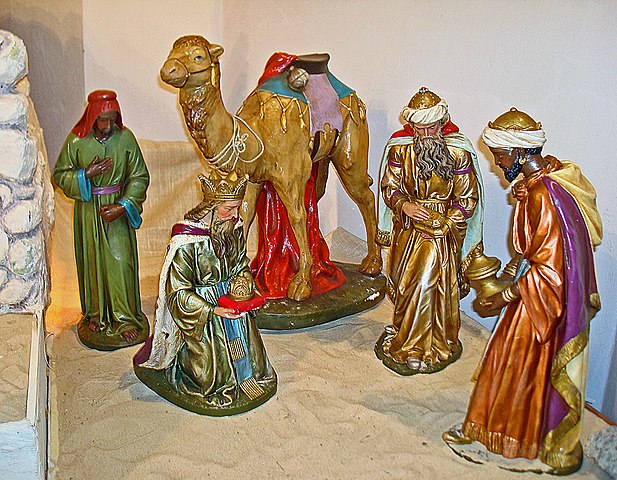 German Nativity scene made about 1920, which bears a striking resemblance to the real-life beaten-up crèche I based the Filliards’ on, Copyright Hewa

“You’re making Christ weep,” Urma said. “How dare you display such a degraded manger scene!  If that’s all you can afford, just don’t display it.  There’s no law saying you must have a crèche, though it’s certainly the best part of Christmas decorating.  All these other decorations, like the tree and wreaths, are pure paganism.”

“Well, unluckily for you, this ain’t your house to be dictating rules in,” Mrs. Filliard said. “It’s a well-loved manger scene that’s been with us for many decades.  A brand-new manger scene wouldn’t have the same type of history and emotions invested into it.”

“You people are hopeless.”

I love seeing all the different manger scenes from various cultures. It’s so beautiful to see how every people reflects themselves and their culture in their depiction of the Holy Family, not just in terms of things like skin color, but also the manger itself, the animals, the clothes, the artistic style, and the materials used. It just shows how the Divine really does have many names and faces, none of them wrong so long as one has a true, sincere belief.

If you’d like to come back this week, I’ll have a series about Battleship Potemkin at 90. Appropriately enough, Part I goes live on the 21st, the film’s actual 90th anniversary. My remaining posts for the year will be my usual year-end wrap-up posts, the year’s final WeWriWa post, and a post about the 120th anniversary of the first time a film was shown to a public, paying audience.