Otis B. Driftwood (Groucho) has been engaged as the business manager of millionaire widow Mrs. Claypool (Margaret Dumont) for the last three months, but so far he hasn’t delivered on his promise to put her into society. All he’s been doing is drawing a handsome salary. When she confronts him, he suggests she invest $200,000 in the New York Opera Company. Herman Gottlieb, the opera director, is most interested to meet Mrs. Claypool and hear of her generous donation, since he’d like to use that money to sign tenor Rodolfo Lassparri.

We then meet villain Lassparri, in a scene I still can barely stand to watch. My parents tell me The Charlie Brown Christmas Special made me cry as a child because the other kids were being mean to Charlie, and as an adult it’s really difficult to watch Harpo (Tomasso) being kicked around and abused. I actually used this clip when I orally presented a paper on bullying.

Driftwood runs into Fiorello (Chico), and through a misunderstanding, enters a contract to represent another tenor, Ricardo Baroni (Allan Jones). Ricardo and his girlfriend Rosa (Kitty Carlisle) are introduced as nice, sympathetic people, an underdog couple we can root for. They fully belong in the story, unlike the dull, chemistry-less couples in the last three MGM films.

The contract scene is one of the film’s most famous scenes. It closes with Chico’s famous line, “There ain’t no Sanity Clause.” This line has been referenced in popular culture a number of times over the years.

Rosa is chosen as Lassparri’s leading lady, but Gottlieb won’t hear of bringing Ricardo to America as well, since he’s just a chorus singer and doesn’t have a reputation yet. Lassparri refuses to sing for the crowd gathered to see the ship off, since he’s not being paid for it, though Rosa happily sings for her fans.

After her beautiful duet with Ricardo, “Alone,” it seems as though Ricardo has been left in Italy, but all is not as it seems. Ricardo, Fiorello, and Tomasso have all stowed away in Driftwood’s giant trunk, and reveal themselves in his tiny stateroom. The crowded stateroom scene is one of the most famous in the Marx Brothers’ catalogue, and has been referenced numerous times in popular culture over the last 80 years. 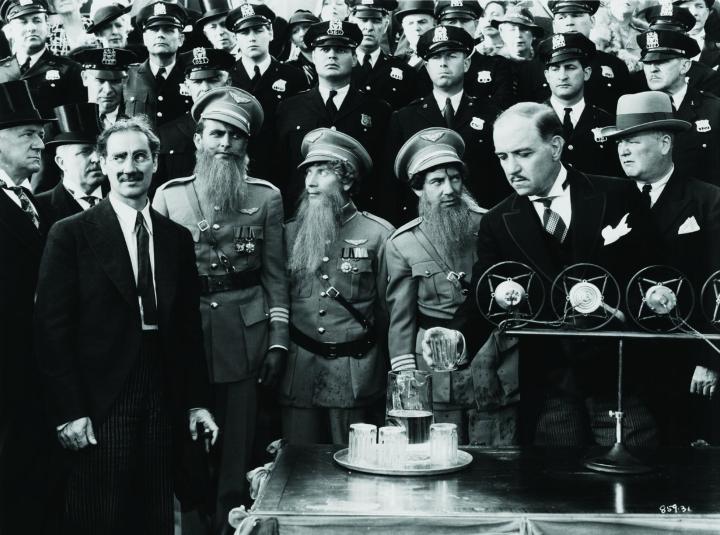 The three stowaways need to find a way to evade the authorities and unboard in New York, particularly after Lassparri spies them in steerage and alerts the authorities. They hit upon the idea of impersonating the world’s three greatest aviators, who are also travelling on the ship. Understandably, their ruse falls through quickly, and then the chase is on to track them down and arrest them. Driftwood is also in lots of trouble for his role in the situation. 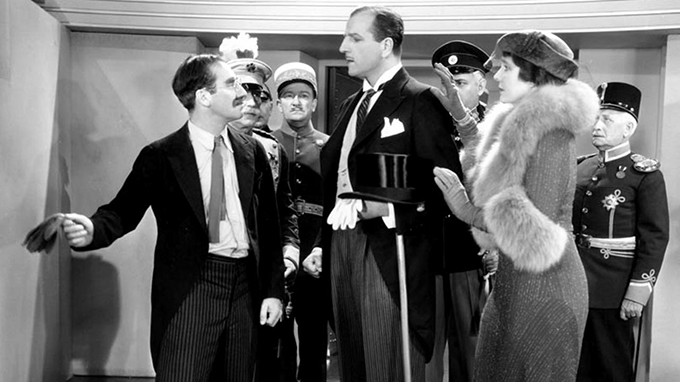 I won’t spoil anything that happens from this point on, but suffice it to say, this team of misfits wreaks havoc on the opera in their quest to humiliate and turn the tables on Gottlieb and Lassparri. We want them to triumph, and to see these villains get their just desserts.

ANATO, along with 1933’s Duck Soup, is the best-known Marx Brothers’ film, even among non-fans. The film reviewers of 1935 generally loved and praised it highly, though some longtime fans were shocked and horrified at how MGM toned down their trademark anarchy and forced other stylistic changes upon them. Groucho felt this and A Day at the Races were their best films, because of Irving Thalberg’s magic touch.

Though the surviving print is 93 minutes, ANATO honestly doesn’t feel too long or bloated at all. Sure, there are a couple of scenes which probably could’ve been cut or shortened to make the plot tighter, but it’s all great material, and nothing feels wasteful or like padding. Even all the musical numbers work really well with the story, since the plot revolves around opera.

There are fewer and fewer excuses for all the non-comedic musical numbers in their succeeding films, particularly cringeworthy dreck like “The Tenement Symphony” and “Two Blind Loves.” By the time of 1941’s The Big Store, you can skip all the musical numbers and not miss anything.

They also never got a pseudo-Zeppo as good as Allan Jones after ANATO and ADATR. He works so well because he has real chemistry with the brothers and a genuine relationship completing the plot. He’s an integral component of those stories, and shows a real personality and warmth. You can’t say the same for someone like the annoying, Mickey Mouse-voiced Kenny Baker.