Released 23 August 1930 (the same day my character Cinnimin was born!), Animal Crackers was the Marx Brothers’ sophomore film (not counting the lost 1921 film Humor Risk). Like all their Paramount films, there’s not much of a cohesive plot to speak of, but just zany antics and wisecracking. All their early films’ plots really take a backseat to their madcap world and jokes.

A lot of early talkies are rather clunky and feel like filmed stage plays, since the rush into sound meant not enough time for ironing out problems such as how much a camera could move and still pick up sound. However, I don’t really get that feeling from the Marx Brothers’ early talkies. These are hardly grand, epic, sweeping sagas calling for stuff like crowd-panning shots, big panoramas, grand battle scenes, and riveting chase scenes.

And while I do feel it was a tragic mistake how the film industry couldn’t let silents, sound films, and hybrids co-exist, I’m ultimately glad we developed the ability to make sound films. Can you imagine the Marx Brothers as silent comedians? Their whole act was always built on verbal humor. Even Harpo’s character works best when contrasted against a talking world. In silent pictures, he would’ve been just another silent clown. 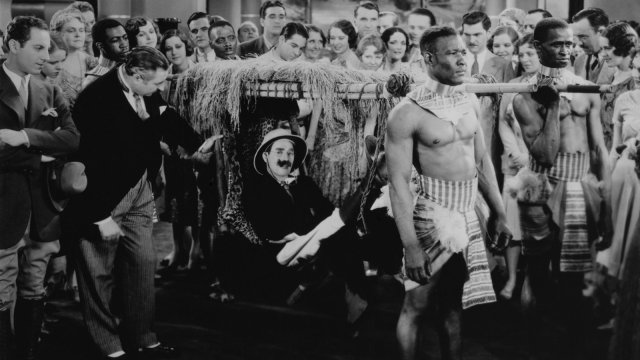 Captain Geoffrey T. Spaulding (Groucho) returns from safari to a hero’s welcome, with a party thrown in his honor at the home of society matron Mrs. Rittenhouse (Margaret Dumont). During the party, a valuable painting goes missing, and the search is on to find it. However, it’s not that easy, since not only is the original painting gone, but there are two copies floating around as well, due to two independent schemes to play switcharoo.

Really, that’s pretty much the whole movie, a bunch of unrelated jokes and wordplay with the inconsequential plot worked in every so often. It’s not even an episodic story, just freewheeling zaniness. Obviously, this won’t be everyone’s style of humor, and I myself had to grow to love and appreciate the Marx Brothers since I was more used to physical slapstick comedy. I also had the misfortune of seeing the worst possible films first, Love Happy and Room Service.

There’s a great scene where Zeppo one-ups Groucho, as he’s supposed to be dictating a letter. When it comes time to read this rambling, nonsensical letter back, Groucho discovers almost everything was left out, and Zeppo informs him, “Now, you said a lot of things here that I didn’t think were important, so I just omitted them.” Zeppo was said to be the funniest one in real life, and had to know all their parts in case one of them were unable to go onstage. He was also, in many female fans’ opinion, the handsomest one.

Unfortunately, a lot of so-called Marx Brothers fans are Zeppo-bashers, which is just as inappropriate as so-called Three Stooges fans bashing Shemp for not being Curly. It’s totally fine to have your own preference for a certain lineup or era, or a certain member of the group. What’s NOT fine is bashing a member of said group just because you don’t like his style or prefer a different lineup or era. Do you really think they’d be happy knowing some so-called fans trash or dismiss their baby brother? Likewise, Curly would be really hurt to know so many of his so-called fans speak so cruelly about one of the big brothers he worshipped.

They also had a pseudo-Zeppo in all seven of their MGM films (the best one being Allan Jones), so you can’t say their act changed a lot after he departed. There was still someone filling that role of the straight man, and you can’t seriously argue the later replacements were nearly as good as Zeppo.

In contrast to the great DVD releases of their MGM films, the five Paramount films are still only available in a rather shoddy-quality release, with barely any special features. These films really deserved better. Hopefully someday we’ll finally see proper restorations.

And if you’re wondering, Harpo has always been my favorite, though Chico has grown to become a very close second.

4 thoughts on “Celebrating Animal Crackers at 85”