To all those observing Shemini Atzeret and Simchat Torah, may you have a marvellous end to the holiday season!

In honor of the awesome month of October, all but two of my posts this month are Halloween-themed. My Monday, Wednesday, and Friday posts will focus on famous horror films of the silent era with landmark anniversaries this year. We’re starting off with one of the granddaddies of horror film, the 1910 Frankenstein.

For years, this first film adaptation of Mary Shelley’s classic horror novel was one of the most famous lost films. (The discussion of why so many films of the silent and early sound era are or were lost is a subject for another post!) Then, in 1963, a 15 March 1910 issue of The Edison Kinetogram surfaced, containing stills and the plot description.

In the early Fifties, Alois F. Dettlaff, a Wisconsin film collector, bought a copy of this film from his mother-in-law, who was also a film collector. He didn’t realize the importance of this film until many years later. The film’s existence was finally revealed in the mid-Seventies. Though it was somewhat deteriorated, it was still in watchable condition. 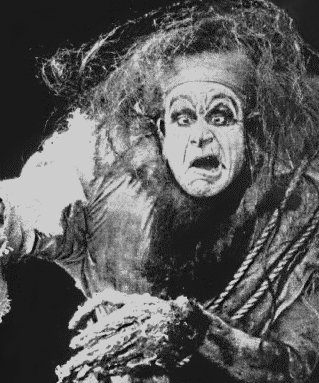 At only 13 minutes, this isn’t a film with a very detailed, complex, developed storyline, but we shouldn’t expect that from the typical 1910 film. Instead, we should marvel at how amazing it is such an old film is still with us, and how these pioneering filmmakers were able to do so much with the medium in its infancy. They didn’t need 60 or more minutes to tell a complete story. Though my favorite period of the silent era is from about 1921 till the end, I have a special fondness for these early short subjects.

Perhaps the special effects might seem lame by modern standards, and the horror aspect not so horrific, but once again, we must put ourselves in the shoes of a 1910 viewer. While it’s natural to have our own reactions as modern people in a specific culture, we can’t divorce anything from its historical and cultural context. It’s really unfair to watch a film past a certain age and laugh at it for not being exactly like the films we’re used to.

In this iteration of the film, young Victor Frankenstein heads off to college to study science and learn the secret of creating his own human being. He finally believes he’s found the winning formula, and brings his monster to life. Frankenstein, however, is so repulsed by what he’s wrought, he abandons his creature in disgust.

Frankenstein returns home to marry his sweetheart Elizabeth, and starts recovering from his horrific shock.  However, his monster has tracked him down, and won’t leave without a fight. During their struggle, the monster sees his reflection in the mirror, and he’s so terrified he runs away. But he just can’t stay away, and returns once more on Frankenstein and Elizabeth’s wedding night.

This film was once on the Top 10 Most Wanted Lost Films and Films Lost Forever lists, and yet it was miraculously discovered. These kinds of miracles give me hope for other valuable lost films to someday be found and restored, particularly Theda Bara’s catalogue.

7 thoughts on “First Frankenstein on Film”