Stachka (Strike) is a very special film to me, since it’s one of the earlier silents I saw, before I made the move from casual interest to an active, passionate cultivator of silent cinema. As you can see from my list of silents seen (which doesn’t start out in chronological order), it’s one of the first listed. Even though I recognize a number of the earliest entries on the list as being out of the order I actually saw them, Strike was still one of the ones I first saw before I became an active participant in the hobby in 2004.

This was one of the films we saw in my Modern Russian Culture class my junior year of university. I’m so old, we actually saw all our films on laser disc. 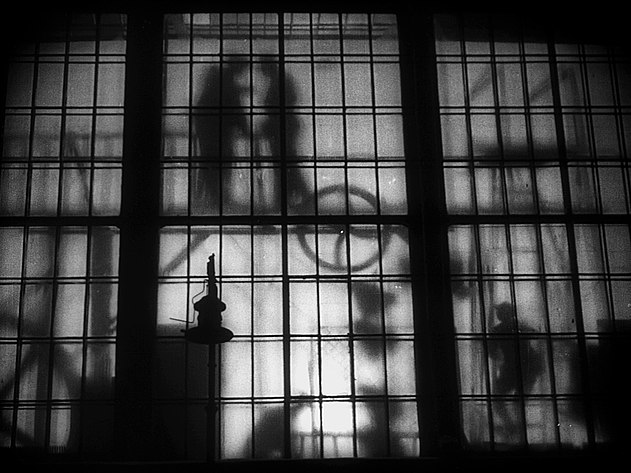 Released on 28 April 1925, this was the début feature-length film of the legendary director Sergey Mikhaylovich Eisenstein. (His surname really transliterates as Eyzenshteyn, but I’m violating my normal purist style to conform to the common Romanized spelling. Even I think Eyzenshteyn looks really awkward in English.) It’s based on a real 1903 strike at a locomotive factory, though the clothes and technology shown are from the 1920s.

The powers that be are shown spying on the workers and looking over a list of spies with rather colorful code names. The atmosphere is thick with tension as a strike is planned. Then a micrometer screw gauge is stolen, valued at three weeks’ pay (25 rubles). A laborer named Yakov is accused of the theft, and subsequently hangs himself. In response, the other laborers riot and stop working.

The third reel begins with images of geese, kittens, piglets, and ducklings. By now the strike is well in progress, and birds are moving into the vacant factory. Some of the laborers’ children play at what their fathers did to the boss, putting a goat in a wheelbarrow and taking it through a mob. All the while, orders continue to arrive at the factory, all unfulfilled.

The situation becomes even worse in the fourth reel, as business has ground to a halt without any workers or consumers. Fights break out at home, and children are starving. There’s also a lot of trouble with a spy named Owl.

In the fifth reel, we meet a new character, code-named King, who makes a deal with an Okhrana (secret police) agent to hire some agitators to loot, raze, and set ablaze a liquor store. A crowd naturally gathers at the site of the fire, and when they try to leave to avoid trouble, the firemen set upon them with hoses.

In the sixth and final reel, the governor sends in the military, and the carnage commences. Even children aren’t spared. The final image of carnage is alternated with the footage of a cow being slaughtered.

This film is full of metaphorical images, like a lemon being squeezed, various animals morphing into characters, and dead cats hanging from rafters, and has been called Eisenstein’s purist film, free from the Bolshevik propaganda he was compelled to use in later films. It’s obviously not the type of film one watches for fun or light-hearted entertainment, but it’s a very historically important film and a must-see for those interested in Russian or Soviet film history, general film history, or Russian history.

2 thoughts on “Celebrating Strike (Stachka) at 90”