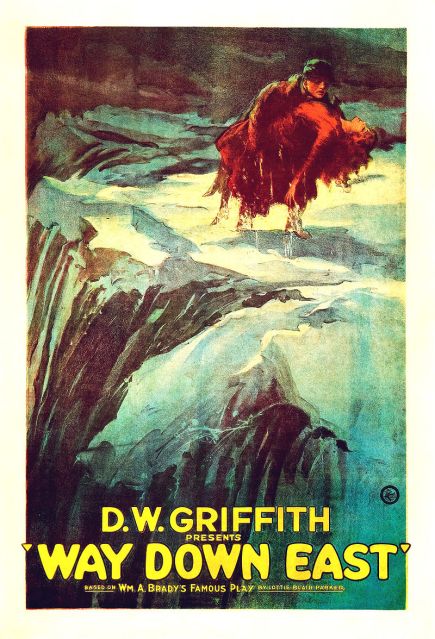 Way Down East, starring the iconic legend Lillian Gish and the rather forgotten Richard Barthelmess, was released on 3 September 1920. I think this was the first film directed by D.W. Griffith I actually loved and enjoyed upon first viewing. As I’ve said, if I had it to do all over again, I would’ve started with his brilliant Biograph shorts instead of deliberately avoiding him because of his most controversial film. That really unfairly colored my entire perspective on this legendary director, as well as on Lillian Gish, for such a long time. But we can’t change our actions or feelings from the past, and can only move forward.

Way Down East is the third of four film adaptations of Lottie Blair Parker’s 1897 play. While a lot of Griffith’s other films are rather heavy-handed, with a sharp black and white perspective, this film isn’t like that. There’s certainly still a strong message and condemnation of small-minded people who judge without knowing the whole story, but it’s conveyed in a more natural way.

Lillian Gish plays Anna Moore, a poor country girl who’s sent to some big-city cousins by her ailing mother. The hope is that she’ll come back with some money, and their lives will improve. The big-city cousins and their friends, however, think she’s some pathetic hayseed and mock her behind her back.

Into this situation steps Lennox Sanderson, a right cad who deceives Anna into believing he’s in love with her. After a whirlwind “courtship,” they’re married by a pretended minister. Lennox tells Anna she can’t tell anyone about their marriage, but when she discovers she’s pregnant, a public reveal is necessary. 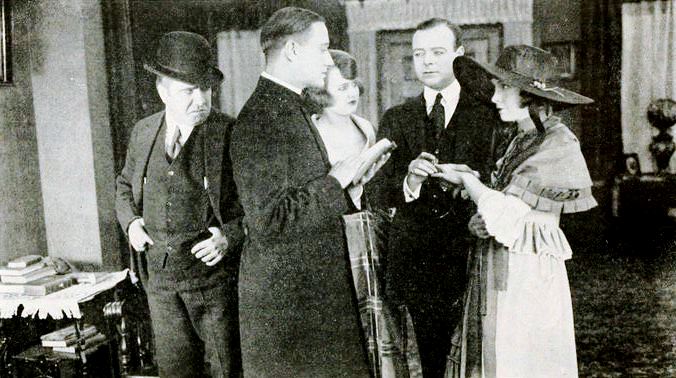 Lennox is far from thrilled to learn he’s going to be a father, and after Anna keeps pressing him, he finally admits they’re not really married. She’s horrified and heartbroken, and goes home to her ailing mother to confess. When her mother passes away, she’s forced to rent a room in a boarding house run by a very Victorian, judgmental woman. One of the other women staying by the boarding house is just as gossipy and judgmental.

The child is born in the boarding house, and becomes very sick. The miserable old biddies have begun hearing talk about the child being fatherless, and don’t believe Anna’s story about the husband being away. The baby continues getting sicker, and Anna performs an emergency baptism, naming her child Trust Lennox.

The judgmental spinster running the boarding house discovers there really is no husband, and kicks Anna out after her baby passes away. During her trek to find work and lodgings, she stumbles across Squire Bartlett’s farm. The crusty Squire isn’t sure he can trust a strange woman, but the loving, understanding Mother Bartlett prevails upon him to remember his Bible and be kind to the stranger.

Naturally, handsome young David Bartlett falls in instalove with Anna, but she constantly rebuffs his attentions. She’s developing feelings for him too, but refuses to divulge the real reason she won’t get into a romantic relationship with him.

In the middle of Anna’s new life on the farm, who should show up again but dastardly Lennox. Each is stunned to see the other, and Lennox demands she be the one to leave. Lennox is determinedly wooing David’s cousin Kate, who’s been planned as David’s bride for quite a long time. There’s competition for Kate, however, as a local eccentric, the Professor, is also wooing Kate.

The truth comes out when one of the old biddies from the boarding house comes to town, and the Squire throws Anna out of his home, right in the middle of a raging blizzard. However, before Anna leaves, she exposes Lennox in front of everyone. David, meanwhile, is livid to discover what Lennox did to her, and runs into the snowstorm to rescue her.

The dramatic, penultimate ice floe scene is the most famous part of this film, and one of the most famous moments of silent cinema. D.W. Griffith was so committed to film realism, he waited until a real blizzard hit to film this scene. Several members of the film crew died from pneumonia as a result. Lillian Gish was such a professional, she put her hand and hair in the freezing water, and could’ve very well gotten pneumonia or hypothermia from all those takes.

I felt the bone-chilling cold the first time I watched this scene, and was really nervous about whether or not she’d be rescued in time. This was all done without any special effects or sound, just good old-fashioned acting.

This is a film I’d heartily recommend to someone looking to explore Griffith’s features. While it is a melodrama and rather long, it’s not as overwhelming as something like BOAN or Intolerance. However, there are some poorly-executed slapstick scenes with the Squire’s farmhand Hi Holler, which really feel out of place and awkward in this film.

While I personally feel the pendulum has swung WAY too far from the opposite extreme of the baby snatch era, seeing this film makes me so glad the sexual double standard is no longer that extreme. A lot of people these days don’t even realize what it was like for women who had children out of wedlock in this era, and the serious consequences of non-marital sex.

3 thoughts on “Celebrating Way Down East at 95”