Warning: This post contains massive spoilers for the entire film. If you haven’t seen it yet and plan on doing so, you may not want to read all the way through.

The Birth of a Nation takes a similar structure to Gone with the Wind, with the first half set during the Civil War and the second half during Reconstruction. While this is a challenging film to watch in the modern era, for obvious reasons, the first half doesn’t really have much racially-charged material. There are a few things here and there, but by and large, it’s far less uncomfortable for me to watch the first half than it is the second half.

BOAN follows two families, the Stonemans and the Camerons. The Stonemans, from the North, consist of Republican Congressman Austin Stoneman, his daughter Elsie (Lillian Gish), and two sons. The most important of these two sons is Phil. The Camerons, from South Carolina, have three sons and two daughters. Of their five children, the ones who matter the most to the story are oldest son Ben and the two daughters, Flora and Margaret. 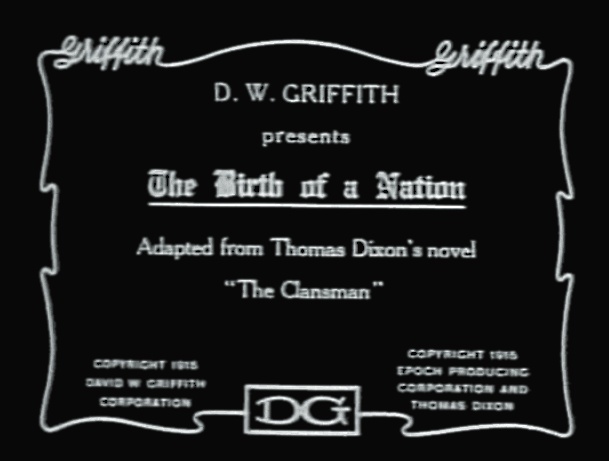 While the Stoneman boys visit the Camerons in South Carolina, Phil falls in love with Margaret, and Ben becomes quite attached to a picture of Elsie, whom he hasn’t yet met. Of course, all five of these young men enlist after war breaks out, each group of brothers fighting for his own side.

During the war, the Camerons’ house gets ransacked by a Black militia under white direction, and they’re rescued by Confederate soldiers. Meanwhile, the younger Stoneman brother and both of the younger Cameron brothers are killed in action, so only one son is left from each family. Ben Cameron is wounded during the Siege of Petersburg, and taken to a hospital to recover. 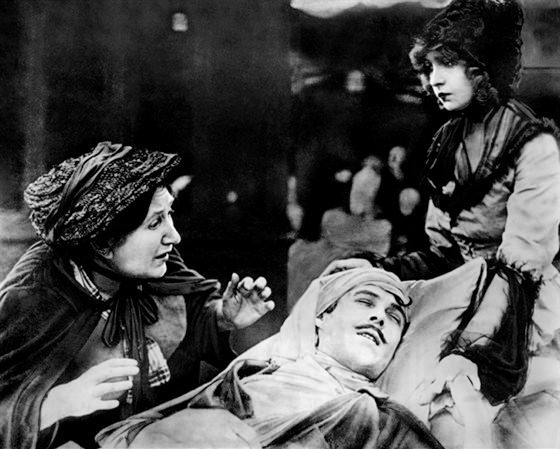 At this hospital, he finally meet Elsie in person, since she’s working there as a nurse. Mrs. Cameron is also there, and with Elsie’s help successfully petitions President Lincoln to pardon Ben from the death penalty. Ben and Elsie of course fall in love, and start courting.

Elsie and Ben are on a date at Ford’s Theater when President Lincoln is assassinated, in a wonderfully-recreated scene. The Camerons are quite unhappy about this, since this brings a premature end to the postwar reality they were getting used to. President Lincoln wanted to pursue a policy of reconciliation between North and South, and not punish the South too severely. That all comes to an end when Andrew Johnson becomes president.

Elsie’s father, the Republican Congressman, visits South Carolina to see how his Reconstruction policies are working out. He takes along his mulatto protégé, Silas Lynch. (I know “mulatto” is considered a bit archaic or even offensive nowadays, but that’s the word used in the film.) The Camerons are quite unhappy about the situation, but Congressman Stone and Lynch are quite pleased. Lynch becomes Lieutenant Governor.

The now-debunked Dunning School of Reconstruction is all over the second half, such as claiming there were almost no whites in the South Carolina Senate, depicting lots of ugly racist tropes as historical truth, claiming unruly African-Americans and radical Northern Republicans terrorized everyone, and justifying the Klan. I’ll go into that more in another post.

Ben sees some kids spooking African-Americans by pretending to be ghosts, and gets the idea for the Klan. Elsie is really upset when she discovers what her boyfriend has done, and breaks up with him. Later, little Flora Cameron (the “dear little one” character D.W. Griffith was so fond of) goes to fetch a pail of water, and is ambushed by Gus (Walter Long in blackface), a freed slave looking to marry a white woman. She runs away and then jumps off a cliff to save her virginity.

Ben has seen his little sister jump, and reaches her in time for her to die in his arms. He swears vengeance, and he and his Klan buddies capture Gus, put him through a kangaroo court, and lynch him, leaving his body on Lynch’s door with a cryptic warning note.

Lynch cracks down on the Klan, and Ben’s father is arrested when he’s discovered with Ben’s costume. Dr. Cameron’s slaves-turned-servants and Phil Stoneman rescue him, and they escape along with Margaret Cameron, the only surviving sister. Their wagon breaks down, and they take refuge in a farmer’s hut.

Elsie goes to Lynch to plead for Dr. Cameron’s release, not knowing he’s already escaped. Lynch then informs her he wants to marry her, and holds her hostage when she refuses. After she faints, she’s put into another room, and Lynch informs Congressman Stoneman about his plans to marry a white woman. At first, Congressman Stoneman is happy, but quickly changes his tune when he discovers Elsie is the intended bride.

While plans are made for a forced marriage, Elsie breaks a window and screams for help, which alerts Klan spies. She then faints again, and is bound and gagged. The Klan, with Ben as their leader, rides to her rescue, and also rescues the besieged Camerons.

African-Americans are forced to disarm, and next Election Day, they’re scared away from voting by the presence of the Klan. We then see the double honeymoon of Phil Stoneman and Margaret Cameron, and Elsie Stoneman and Ben Cameron. The final intertitle pleads for an end to war and an embrace of peace.