This post is edited from the biography I wrote for Róża’s Find a Grave page. It’s not a crime to plagiarize yourself!

Róża was born and raised in Ciechanów, Poland. In November of 1942, her family was deported to Auschwitz, and Róża was the only one not gassed on arrival. She was selected to work as a Bekleidungskommando in the Birkenau area of the camp, sorting the confiscated belongings of the prisoners and the murdered.

Róża put together a resistance group that distributed news obtained by listening to radio broadcasts in secret. Eventually, Róża found out about a revolt the Sonderkommando were planning, and recruited a number of other women to help out. 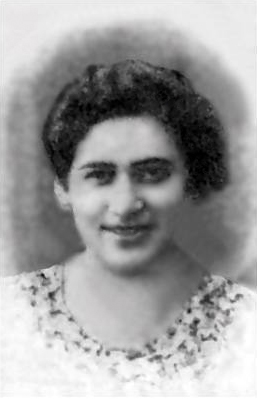 She contacted Ala Gertner, Hanka and Ester (Estusia) Wajcblum, Hadassah Zlotnicka, Ruzia Grunapfel, Marta Bindiger, Inge Frank, Regina Safirsztajn, Genia Fischer, and a number of other women working in the Union Munitions factory, which made rocket parts for V2s. Their room of the factory was the only place in Auschwitz where inmates had access to gunpowder. They set aside a small amount of gunpowder each day, at great personal risk to themselves, and smuggled it back to Róża, who in turn passed it along to her old friend Asir-Godel Zilber. The smuggling chain continued until it made its way to a group of Sonderkommando who assembled it into bombs and grenades. It took over a year to smuggle enough gunpowder to make the revolt and attempted escape a reality.

On 7 October 1944, Crematorium IV was blown up, although the uprisings in the other crematoria were put down before they were able to get that far. In retribution, every third Sonderkommando was shot. An investigation went on for weeks, and the gunpowder was finally traced back to the Union Munitions factory.

During this time, Noah Zabladowicz, one of the underground leaders, managed to steal a visit to Róża, who urged him and the other members of the underground to keep on with their resistance work. Her final message, which was smuggled out of her cell, was a note saying “Hazak v’amatz,” Hebrew for “Be strong and brave.”

Róża and the other three women were publicly hanged in the women’s camp on 5 January 1945, two weeks before the camp was evacuated. Their last words, according to survivors, were said to be either “Be strong!” or “Revenge!”

In 1991, a memorial at Yad Vashem was dedicated to Róża, Regina, Estusia, and Ala, recognising their act of heroism.