“My human conscience and my understanding of the fateful consequences both for the people involved and the policy of our country now and in the future did not allow me to remain idle. And I decided to do all in my power to prevent what was being planned from happening; I knew that this action was going to shame Bulgaria in the eyes of the world and brand her with a stain she didn’t deserve.”

Dimitar Peshev was born into an affluent family in the western border town of Kyustendil, Bulgaria. He studied languages in Thessaloniki, Greece, and his own nation’s capital of Sofia. He served during World War One, on the Southern Front, and became a judge after the war. From 1935–36, he was Minister of Justice. During him time in Bulgaria’s Parliament, he was known as honest and honourable. In 1938, he was elevated to the position of Deputy Speaker of the National Assembly, and took special interest in safeguarding the Constitution and human rights.

Dimitar was a good friend to Bulgarian Jewry, though initially he hadn’t protested the forced adoption of anti-Jewish legislation in the wake of Tsar Boris III‘s complicated alliance with Nazi Germany. However, on 8 March 1943, a delegation marched into Dimitar’s office to plead for a halt to the planned deportations. Initially, only the Jewish community of the quasi-annexed Thrace and Macedonia had been marked for murder, but since their population came up well short of the planned 20,000, the rest had to come from Bulgaria proper.

The delegation included Dimitar’s friend Jakob Baruch, who told him about the nefarious plans afoot. Dimitar couldn’t believe it at first, but several high-ranking government officials confirmed it. By the next morning, he was determined to do all in his power to stop the deportations. 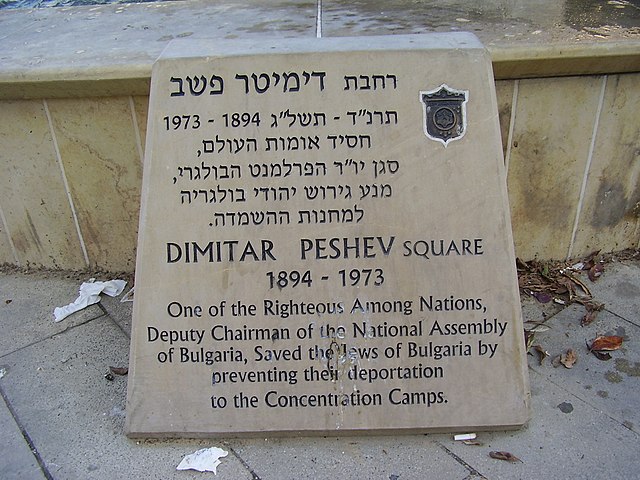 Dimitar repeatedly tried to meet with Prime Minister Bogdan Filov, but was met with refusals each time. Dimitar and his friend Petar Mihalev then met with Interior Minister Petar Dimitrov Gabrovski, begging him to cancel the deportations. Finally, the governor of Kyustendil agreed to cancel them. Orders had also come from Tsar Boris III himself to stop the deportations.

Sadly, the order didn’t reach all areas of Bulgaria in time, and the communities of Thrace and Macedonia were rounded up on 10 March. These territories hadn’t been formally annexed to Bulgaria, and were under Nazi administration. Dimitar was horrified to learn about this, and did all in his power to stop the deportations of the 50,000-strong Jewish community within Bulgaria’s pre-war borders.

Dimitar wrote a letter to Prime Minister Filov on 19 March, trying to prevent any further anti-Jewish legislation. The letter was signed by the Kyustendil delegation and 43 government deputies. The Prime Minister was livid at this letter, but 30 of the deputies refused to withdraw their signatures after his little temper tantrum. However, Dimitar was censured and removed from his post of Assembly Vice-Chairman on 24 March.

After the war, the new government brought charges against the Old Bulgarian Parliament for allegedly collaborating with the Nazis. Dimitar was tried as an alleged anti-Semite and anti-Communist, and also accused of having accepted Jewish bribes to stop the deportations. Mercifully, the testimony of his Jewish friends from the Kyustendil delegation saved him from a death sentence. He was given a 15-year sentence and released after one year.

In January 1973, Dimitar was honoured as Righteous Among the Nations. He passed away a month later.