Carl Lutz was the Swiss Vice-Consul in Budapest from 1942–45, and is credited with the largest rescue operation of the Shoah. It’s believed he saved over 62,000 people. Thanks to him, over half of the Jewish population of Budapest survived.

Carl was born and raised in Switzerland, though he immigrated to the U.S. at age 18, and lived there for over 20 years. He started off in Illinois, where he worked to earn money for college, and attended Central Wesleyan College in Warrenton, Missouri. In 1920, he started working for the Swiss Legation in Washington, D.C., where he continued his education at the esteemed George Washington University. 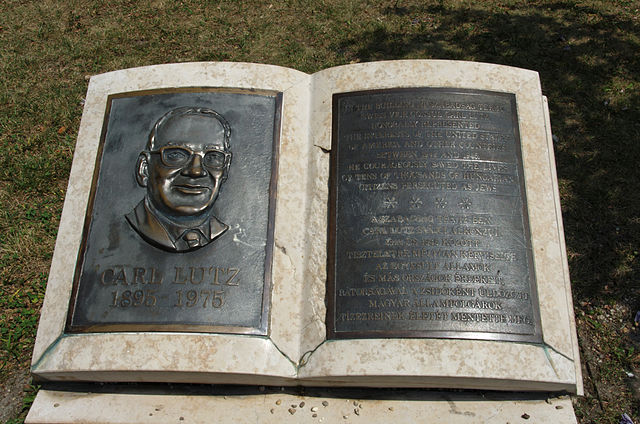 In 1942, Carl was appointed as Swiss Vice-Consul in Budapest, where he began working with the Jewish Agency for Palestine. Almost 10,000 children received safe-conduct documents enabling them to make aliyah (move to Israel). Though Hungary was a Nazi ally, its Jewish community had remained relatively safe, intact, and untouched (barring forced-labour for some men).

All that changed after the Nazi invasion on 19 March 1944, when Europe’s last major Jewish community swiftly lost its comparative haven. Carl began moving quickly to negotiate a deal with the Hungarian government and Nazis, in which 8,000 protective letters for immigration to Palestine were issued. He applied this 8,000 figure to families, not individuals, so he’d save as many people as possible. Carl also issued tens of thousands of other protective letters, each with a number between one and 8,000.

Carl established 76 safe houses in Budapest, declaring them annexes of the Swiss Legation and thus off-limits to the Hungarian and Nazi authorities. He even persuaded Nazi and Arrow Cross thugs, among them Eichmann, to tolerate his protection of Budapest Jewry. His rescue efforts were so bold and prolific, Germany’s representative to Hungary asked Berlin for permission to assassinate him. Thankfully, he never got a reply, and never took matters into his own hands.

Memorial by the Glass House (Üvegház), Copyright Indafotó, by redoctober

A story is told about Carl jumping into the Danube to save a Jewish woman who’d been shot by the fascist Hungarian Arrow Cross. He swam back to shore with her, through the deep water, and asked to speak with the officer in charge of the firing squad. He claimed she was a foreign citizen protected by Switzerland, and took her to his car. No one even tried to stop him.

Carl remained in Budapest until he was ordered to flee from the approaching Red Army. Shortly after the war, in his native Switzerland, he was criticised for exceeding his authority and risking the nation’s neutral status. In 1958, his public reputation was rehabilitated.

In 1965, he became the first person from Switzerland honoured as Righteous Among the Nations. Several streets have been named after him, along with various memorials, and Germany bestowed him with the Cross of Honour, Order of Merit.