“I am certain that, at the end, truth will triumph over lies, and love will overcome hatred.”

Pavel Peter Gojdič, a fellow Slovakian, was a Basilican monk and bishop of the Slovak Greek Catholic Eparchy of Prešov. He was baptized as Peter, ordained on 27 August 1911, beatified in 2001, and honored as Righteous Among the Nations in 2007.

Following his ordination, Father Peter did some pastoral work and then was appointed prefect of the Eparchial Boarding School for boys in Prjashev (“The Alumneum”). At the same time, he served as a religion teacher in one of the city’s other schools and as assistant parish priest in Sabinov. Eventually he became Chancellor in the Bishop’s Chancery Office, but diocesan administration didn’t appeal to him, and so he became a Basilican monk. He entered St. Nicholas Monastery on Chernecha Hora on 20 July 1922, and took the name Pavel upon taking the habit on 27 January 1923.

In 1927, he became Bishop of Harpasa and presently went to Rome for his episcopal ordination. While privately meeting with Pope Pius XI, he was given a gold pectoral cross and told, “This cross is only a faint symbol of the heavy crosses that God will send you, my son, in your work as bishop.” However, things were good at first, as under his watch a new orphanage was built, new parishes created, religious periodicals launched, prayers published, and numerous educational institutes supported. His motto was “God is love, let us love him!,” and the people described him as a man with a heart of gold. 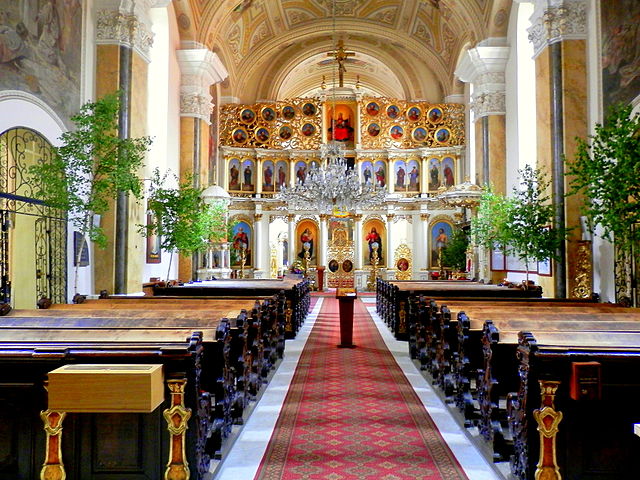 In 1940, he became Bishop of Prešov, a role in which those heavy crosses indeed came to bear. The previous year, he’d written letters to each of his parishes, strongly warning them of the consequence of going along with the new anti-Jewish legislation enacted by the new fascist government. When the fascists called for mass deportations, Bishop Gojdič wrote another letter of protest.

Bishop Gojdič began rescuing people from concentration-camps and helping refugees and prisoners. He also oversaw numerous fake conversions, which eventually came to the notice of authorities.  Of 249 Jewish families, 533 people had converted to Slovakian Greek Catholicism or Russian Orthodoxy to save 1,500 unconverted people in their families. Most of these people also continued to practise Judaism, both openly and secretly.

After the liberation, the people Bishop Gojdič had rescued offered to help him escape to the West, since they felt his life would be in danger under the new Czechoslovakian authorities. Not only did he bravely refuse to leave his flock, but he also launched a huge campaign to reinforce religious faith. He continually refused to renounce his Catholic faith, and after the Greek Catholic Church was finally outlawed, Bishop Gojdič was arrested, put through a show trial for “high treason,” and given a life sentence.

Throughout his ordeal in various prisons, he remained faithful, saying Mass and praying secretly, in spite of being tortured, humiliated, and isolated. There was an amnesty following Stalin’s death in 1953, and Bishop Gojdič’s sentence was commuted to 25 years. His by-then-poor health continued deteriorating, and all further requests for amnesty were denied.

In the Ruzyň prison, he received a final offer to become patriarch of Czechoslovakia’s Orthodox Church, but he again refused to betray his Catholic faith. He died of cancer in Leopoldov Prison on his 72nd birthday, and was buried in an anonymous grave. In 1968, during the Prague Spring, his remains were taken to Prešov, and since 1990 have been in a sarcophagus in the Greek Catholic Cathedral of St. John the Baptist.

On 27 September 1990, Bishop Gojdič was rehabilitated. He later posthumously received the Order of T. G. Masaryk, Second Class, and the Cross of Pribina, First Class.