This is the second installment of a planned four-part series on “What happens when good bands become very popular very quickly, and are also heavily pimped to teenyboppers.” Part I was a review of More of The Monkees (expanded from my old Angelfire review from 2002), Part III will discuss Herman’s Hermits’ albums, and Part IV will discuss the shameless Capital repackagings of The Beatles’ albums through 1966. If you don’t share my taste in music, please don’t waste your time and energy writing some long rant in the comments. It was bad enough when the two Arbots did that on my only post to have comments closed.

Today I will be reviewing this album, which released 21 November 1983: 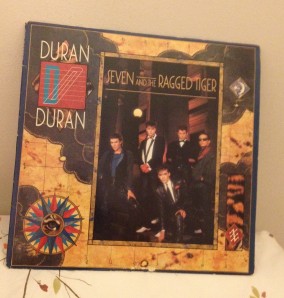 I’ve been a Monkeemaniac for 28 years (yes, I’m old) and a Duranie for a bit over three and a half years. Almost from the beginning of the latter fandom, I’ve been struck by parallels between the two bands and their fandoms. Both got super-famous super-quickly, both were heavily pimped to teenyboppers, both got the stigma of not being serious bands because of the throngs of screaming teen girls, both are being kept out of the Rock and Roll Hall of Fame by that élitist ass Jann Wenner, and both have taken a long time to finally start being recognised as substantial, serious bands due to the abovementioned stigma. And of course, fans of both haven’t always been treated so nicely, with assumptions including we’re all teenyboppers who never grew up. (I became a Monkeemaniac during the 1986 revival, and became a Duranie when I was 31, so the teenybopper label can hardly be applied to me in either case!)

Anyway, Seven and the Ragged Tiger also naturally has parallels with the early 1967 album More of The Monkees, though at least this album was deliberately created as an album and the band didn’t find it in stores by total surprise, no idea that cover image or those songs had been used. However, it was released at the height of the first wave of their popularity, and it doesn’t take a genius to figure out it was rushed together mostly to keep the teenyboppers happy, with much less thought to musical or artistic substance. Their first two albums are obvious 5-star albums and far superior to this “keep the fans happy for the meantime” effort. 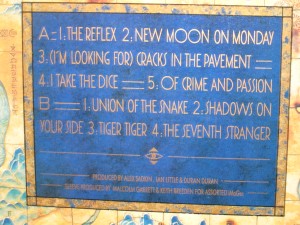 Judging it honestly, I’d give this album 3.5 stars. I don’t dislike it, but it’s not a solid classic I could listen to every single day, or even on a regular basis. Maybe I’m too generous with most of my album ratings, but I like to find nice things to say even about a mediocre or bad album, and to take every album in context, with perspective.

There’s really no excuse for a 1983 album, by a real band, to be padded with so much filler. It’s always a bad sign when the strongest, most memorable songs are the singles. It’s embarrassing to see a song title, a song you know you’ve heard, and wonder, “How does that go again?” I expect hit singles and a bunch of filler on an album from 1964, not 1983. The hits are the hook which lures the listener in, but the album tracks are the glue which makes the listener want to return to the album and keep listening. The album tracks are the bridges between the singles, and should be just as strong as, if not stronger than, the big hits.

The strongest tracks are “The Reflex” (though the album track is a lot different than the single mix), “New Moon on Monday,” “Union of the Snake,” and “The Seventh Stranger.” The first three have awesome music videos (back when music videos were an actual artform, before they devolved into the hot messes they are today). “The Seventh Stranger” wasn’t a single, but I love it. It’s full of poetic, beautiful lyrics. I like the instrumental “Tiger Tiger” too, though it’s not as strong as “Tel Aviv,” the instrumental which closes their 1981 début album. 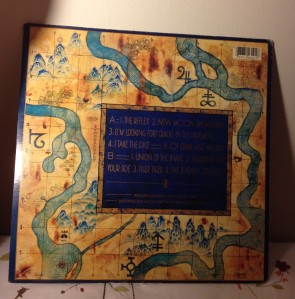 “(I’m Looking for) Cracks in the Pavement,” “Shadows on Your Side,” “Of Crime and Passion,” and “I Take the Dice” are rather embarrassing, cheesy, pointless. They’re just kind of there, and not that memorable. Again, huge mistake when an album’s strongest, most memorable tracks are the singles. This album could’ve been a lot stronger if they’d included the gorgeous, atmospheric, underrated “Secret Oktober” (the B-side of “Union of the Snake”) in place of any of the filler songs, and held off the album’s release so they could include other B-sides, like the lovely “Come Up and See Me (Make Me Smile).”