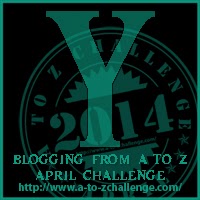 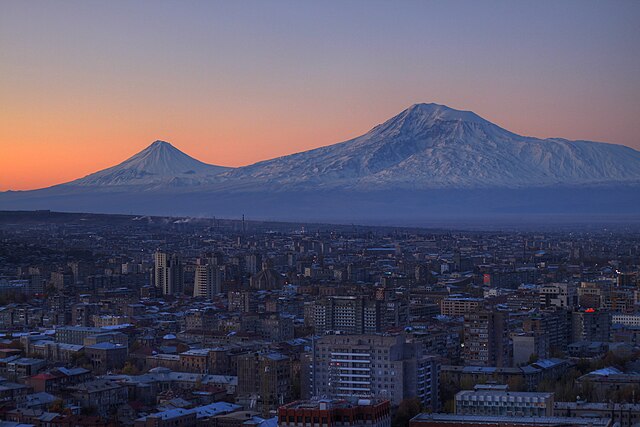 Yerevan panorama with Mount Ararat in the backdrop, image by Serouj Ourishian.

Yerevan, home to over one million people, is one of the world’s oldest continually inhabited cities. People have lived there since at least the 4th millennium BCE, when the Bronze Age started. In 782 BCE, King Arghisti I built the Erebuni Fortress to defend his territory from Northern attacks. The city got its modern name in the 7th century CE.

Because of its location at the crossroads of many empires, Yerevan was occupied and fought over by a number of different peoples over the centuries—Arabs, Seljuks, Mongols, Ottomans, Persians. During the Turkish-Persian wars, the city changed hands 14 times. During these wars, in 1604, Shah Abbas I deported tens of thousands of Armenians to Persia, and Yerevan was left only 20% Armenian.

In 1828, Armenia became part of the Russian Empire and was surrendered by the Persians. During this period, Yerevan’s Armenian population steadily increased, as many people returned from Persia. The city also became more modern and built many new buildings, including two women’s colleges. Yerevan’s first public library opened in 1905, and a telephone line with 80 subscribers went live in 1913.

From 28 May 1918-2 December 1920, Armenia was a free republic. Then it passed into Bolshevik hands, and gradually became even more modern, with even more Armenians moving in. However, this came at a very steep price, as the Great Terror of 1936-8 strongly swept into Armenia. Nationalism and religion were outlawed, and people who went against the régime were arrested, tortured, and executed, or forced into exile if they could escape. 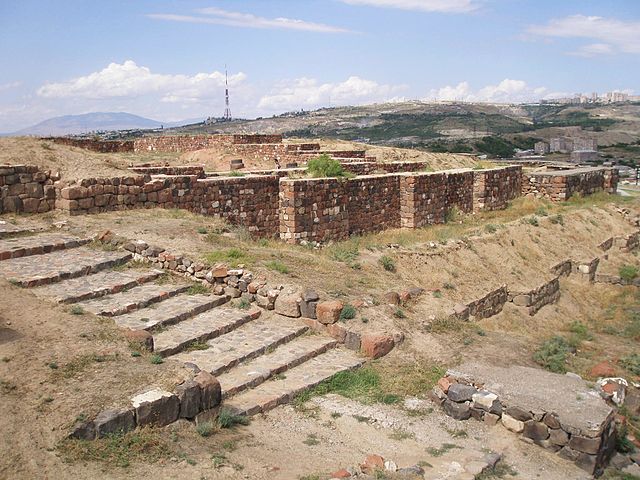 The ruins of the walls of the Erebuni Fortress, Copyright Travis K. Witt.

View of the city from the top of Tsitsernakaberd Hill, image by D-man.

Yerevan is the setting for some of the scenes in Chapters 26 and 27 of my WIP, Journey Through a Dark Forest, at the height of the Great Terror in 1937. After former orphanage girl Alina Petropashvili leaves Kutaisi, she moves in with her old Armenian friends in Yerevan. Ohanna has also lost her husband, and has been left a young widow with a 5-year-old daughter and what turns out to be a twin pregnancy. Izabella hasn’t married or accepted suitors, afraid of losing her man too.

On her first full day in Yerevan, Alina takes Ohanna’s daughter Siranoush on a walk, as Siranoush points to things and Alina says the word in Georgian. Siranoush then teaches her the Armenian words. All the while, she stays close to her new adult friend when an NKVD officer appears. They end up at the new Yerevan Botanical Garden.

I just had to use buffoonish Kostya Godunov one more time, so he appears in Chapter 27, after his slap on the wrist for aiding and abetting his repugnant cousin Misha’s brothel. He was told to take his grandmother and leave Russia, and Kostya went right to Batumi, Georgia, before taking a little holiday to Armenia. Kostya is dressed as outlandishly as ever, and makes himself look like a complete moron to Ohanna and Alina. Before they finally relent and give him directions to the Sundukyan Academic State Theatre, he unwittingly gives them advice about how to get to Iran through the Alborz Mountains.

Yerevan also appears in my handwritten magnum opus Cinnimin, as Cinni’s daughter Olga and her family are visiting Armenia when the 1988 earthquake hits. Cinni and Levon are also sent on a trip to Armenia by their children in 1995, as an anniversary present.

Railway Station, with a statue of David of Sasun, image by Nina Stössinger (http://www.flickr.com/photos/ninastoessinger/4192071193/).