Uelen is a selo (village) of about 720 people in the Russian Far East, at the crossroads of the Bering Sea and the Chukchi Sea. It’s also near Cape Dezhnev and on the Uelen Lagoon. Russia’s easternmost settlement, it’s not exactly renowned as a major tourist attraction.

Evidence exists for settlement in the area for at least 2,000 years. Previously, the city was called Ulyk, which means “land’s end.” Its old name in the Chukchi language was Pok’ytkyn, which means “flooded place.” The name Uelen first appeared in 1792. 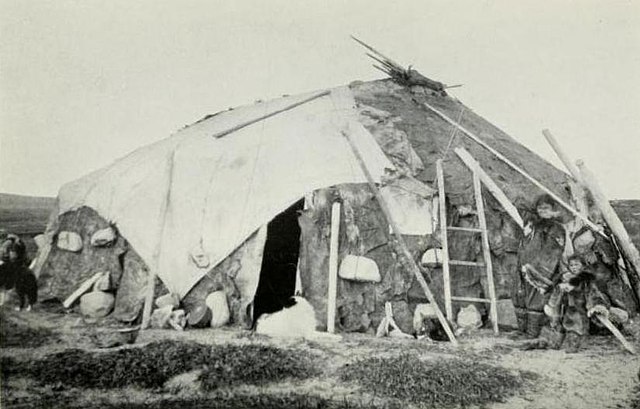 Uelen appears in my first three Russian historicals, as the place where some of my characters are able to get on boats heading for Alaska Territory or America. After the Revolution, Uelen continued its tradition of a bustling American trading post. There would be Americans (including military) and ships going to America there. It might’ve been a little more challenging than leaving by a major port in a bigger city, but Uelen is more tucked out of the way. It would be relatively easier to leave, either legally or clandestinely, in this small trading village.

Uelen’s first school was established in 1916, and an early Arctic research station was created. During the Fifties, many native Siberians were relocated to Uelen when their villages were declared uneconomical and closed. The village’s population thus increased quite a bit, and also got a huge boost to its cultural reputation with the influx of native art carvers.

The village is well-known for its ivory carvings made from walrus tusks. Many masters of this genre of art lived and worked in Uelen. The Uelen Bone Carving Studio is unique as the world’s only art museum of this type. The village also has a choir who’ve long collaborated with Inuits in Alaska.

Yuriy Sergeyevich Rytkheu, widely considered the father of Chukchi literature and one of Russia’s most important native Siberian writers, hailed from Uelen. He wrote in both Russian and Chukchi—novels, poems, short stories, articles. His writing earned him the Maksim Gorkiy RSFSR State Prize, the Grinzane Cavour Prize, the Order of the Badge of Honour, the Order of the Red Banner of Labour, and the Order of Friendship of Peoples.

Archaeological excavations have unearthed a burial ground of early whale hunters, from 500 BCE-1000 CE, proving that Uelen was a very important settlement in antiquity. Excavations have also discovered more walrus carvings, many of which are now on display in St. Petersburg’s Pyotr the Great Museum of Anthropology and Ethnography.

In spite of the village’s small size, they still have a beautiful Orthodox church made from wood, with a green roof and turrets, and a small golden onion dome.

http://ultima0thule.blogspot.com/2010/03/uelen-russian-eskimo-settlement-start.html (has some beautiful pictures)