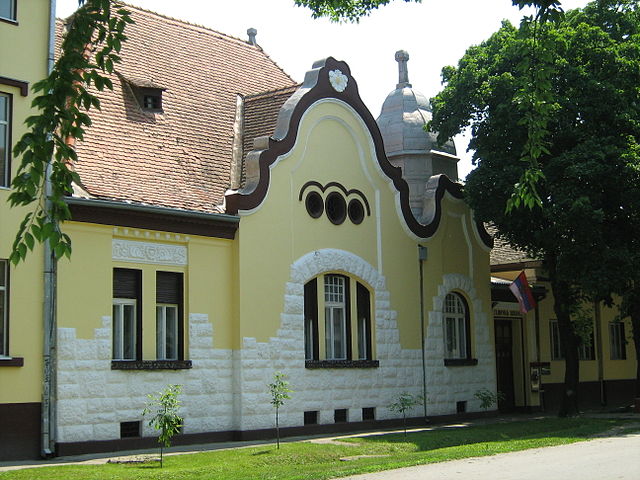 Front of the Orthodox church; image by Laslo Varga.

Odžaci is a town of about 8,700 people in Northwestern Serbia. Its name means “chimneys” in Serbian, based off the Turkish word ocak (pronounced the same way), which means “fireplace.” In Hungarian, its name is Hódság; in German, Hodschag. The town’s original name was Kéménd, which is Hungarian for “with chimney.” It was first recorded as existing in 1522, though was soon destroyed during the Ottoman invasion of Southeastern Europe. The Ottomans rebuilt it at a nearby location soon after, under the name Ucsak.

My character Svetlana Jurić and her family, of my hiatused WIP Newark Love Story (set from January 1952-possibly 1968), are from Odžaci. During the WWII occupation of the Vojvodina Province, the Jurićs fell into the hands of the sadistic Croatian Ustashis, and Svetlana, her mother, and her four sisters were interred in the brutal Jasenovac camp. Her two brothers, and her oldest sister’s boyfriend, survived with the partisans in the woods. Svetlana’s father was publicly hanged.

During the years of the Austro-Hungarian Empire, Odžaci had a diverse population, made up of Germans, Hungarians, Serbs, and Slovakians. Roman Catholicism was the majority religion. Today, now that Serbia is free, the majority of residents are Serbs, with some Hungarians, Slovakians, and Roma. As in old days, there is still an important textile industry. The big industry in Ottoman and Austro-Hungarian days was hemp.

The city is also home to many churches, many of which contain treasure troves of artwork, historic documents, old and new books, tombs, ikons, and religious articles.