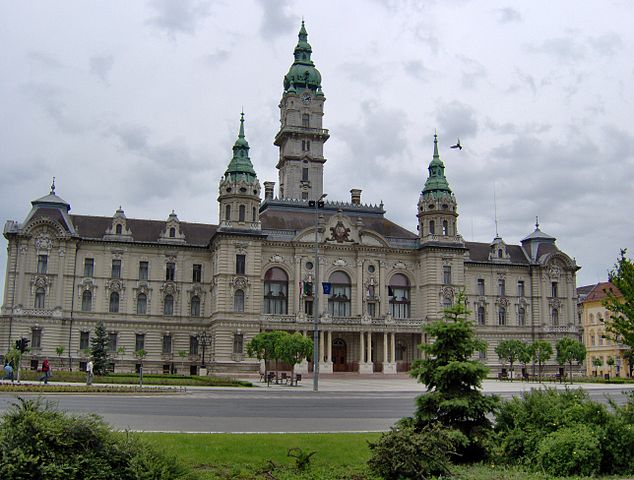 Győr is a city of about 131,000 in Northwestern Hungary, and the nation’s sixth-largest city. Its Slovakian name is Ráb, and its German name is Raab. The city’s first large settlement dates from the 5th century BCE, when the Celts lived in the area. For the next eight centuries, the town was called Arrabona.

The Romans moved in during the first century BCE, and in 10 CE, the Roman Army occupied this part of Hungary. Though the Romans fled in the 4th century, in the face of frequent attacks from the tribes living to their East, the town itself remained settled. Like many of the other areas in Eastern Europe, Győr too changed hands many times. Finally, in 900, the Magyars came in, and the city got its proper Hungarian name.

However, the city continued changing hands, falling under the rule of the Mongols, Czechs, Ottomans, Austro-Hungarians, French, and Nazis. The Turkish name for Győr is Yanık kale, Burnt City, in reference to how the city was burnt to the ground and abandoned to avoid a battle with invading Ottomans in the 16th century.

The River Rába, image by Balint86 at hu.wikipedia, CC-BY-SA-2.5; Released under the GNU Free Documentation License.

The Esterházy half of the Laurel-Esterházy family of my Atlantic City books hails from Győr. Lt. William Winston Laurel, of Blackpool, England, was stationed in Győr when he met and fell in love with Etu Esterházy, part of a family of 16 children. After the Nazi occupation of Hungary, William was able to smuggle their four daughters out of the ghetto, including their newborn Daniella, and take them to his parents in England, but Etu refused to go with him.

William found her when his troop liberated one of the camps, and they returned to Győr until the failed Revolution of 1956, after which they moved to Hartford, Connecticut. They moved to Atlantic City in late 1962, eventually having 20 children. Etu died in premature labour with the final baby, Tikva, born in July 1966. Their children were named in alphabetical order. The children who became main or important secondary characters are Lauren, Kathi, Piri, Ophelia, Herbert, Regina, Serafima, Tikva, Emma, Bella, Gustave, and Quentin. Now their own children have assumed leading roles.

Because I’m a huge, proud, lifelong, second-generation Lucy Stoner, William and Etu’s sons got the surname Esterházy, and the girls got the surname Laurel. The majority of my female characters keep their birth names and often give their family names to their kids. Sometimes a couple will alternate last names, as well as hyphenating. I grew up with married parents with different names, so it’s completely normal to me.

The city is home to many beautiful old churches, including a basilica, the Carmelite Church, the Benedictine Church, and the Benedictine Archabbey of Pannonhalma. Other treasures include the City Art Museum, the Bishop’s Palace, the reliquary of king Ladislaus I, the historical Xántus Museum, the János Xántus Zoo, an aquapark on the River Rába, and three universities.

The first Jewish community in the area was founded in 1791 in Győr-Sziget, and slowly developed and increased. During the 19th century, Hungarian Jews gained more and more rights and protection, and the city’s community got even larger and more vibrant. There were perhaps 6,000 on the eve of WWII. The majority were actually Progressive, not Orthodox. Don’t believe the modern-day Hareidi revisionist history claiming that Europe was one happy, unified frum community except for those awful Reform people in Germany and Austria. There were a lot of Progressive shuls all over Europe, even in places you might believe to be strongholds of Orthodoxy, like Poland and Hungary.

Today the city’s synagogue functions as a cultural centre and art museum.