This post is dedicated to the memory of Frederik Jacques (Frits) Philips, 16 April 1905 – 5 December 2005, one of Eindhoven’s greatest citizens.

Eindhoven is a Southern Dutch city, with the Dommel stream running through it. It was formerly at the convergence of the Dommel and the Gender streams, prior to the Gender being dammed. Eindhoven is Holland’s fifth-largest city, at 220,000 people in the city proper and 720,000 in the entire metropolitan area. In 2011, the city was named the world’s most intelligent community.

Eindhoven first appeared in records in 1232, when it gained city rights. During the Middle Ages, several castles were built within its walls. One of these castles was destroyed in 1486 by invading, plundering forces from nearby Guelders. In 1543, it was attacked and destroyed again, and in 1554, a massive fire destroyed 75% of the city’s houses. Eindhoven went back and forth between Dutch and Spanish control during the Dutch Revolt which began in 1566, and was burnt and sacked by the Spanish.

Eindhoven didn’t become part of Holland again until 1629. It suffered a siege by the Spanish in 1583, and later fell under French occupation. During the French occupation, Eindhoven’s buildings were once again destroyed. Finally, the city started recovering during the Industrial Revolution. Sadly, large parts of the city were destroyed once again during bombing raids in WWII. Not many historical buildings are left in Eindhoven, thanks to all this destruction over the centuries.

I haven’t written about Eindhoven to date, but it’s mentioned as the adult home of my secondary character Bram ter Avest. Bram has been living there for at least a few years as of 1940, and he’s somewhere in his twenties. After the War, he returns to Amsterdam with his father Kees, and eventually is reunited with his mother Gusta and sister Floor.

Graffiti in Eindhoven, image by Lempkesfabriek.

Eindhoven is a big-time college town, with four universities and a branch of Holland’s Open University. For years, the Philips Company had factories in Eindhoven, making lightbulbs, vacuum tubes, technology, electronics, electric razors, radios. After the Nazi invasion in May 1940, the Philips family fled to America and took much of their company capital with them.

The only Philips who stayed, Frits, was interred in the Vught camp from May-September 1943, and saved 382 Jews by convincing the Nazis that their work was indispensible at his factory. For his heroic actions, he was honoured by Yad Vashem as one of the Righteous Among the Nations. He was greatly esteemed by the people of Eindhoven for how he made no distinctions between factory workers and higher-ups in the company, and often talked with his workers as friends. The people called him Meneer (My Sir) Frits. There was a huge celebration in Eindhoven for his 100th birthday in 2005.

Eindhoven’s liberation by the British, 19 September 1944, with St. Catherine’s Church in the background.

The city boasts of a number of museums, including an open-air archaeological museum; a history museum; art museums; a lightbulb museum; the Inkijkmuseum (Look-In Museum), which hosts small exhibits viewed through the windows; an auto museum; and a museum on lighting as an artform. The city also has many sculptures and other public art displays.

The city also has many theatres, music halls, and cultural and entertainment festivals. Every year on 18 September, the anniversary of Eindhoven’s liberation from the Nazis, a parade called the Lichtjesroute (Route of Lights) is held. 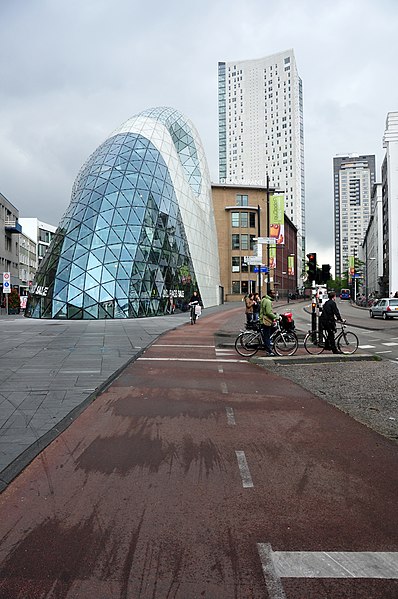 16 thoughts on “Eindhoven, The Netherlands”