After just a month shy of three years with this blog, I’ve reached my thousandth post! 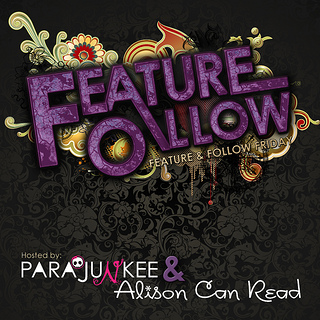 Feature and Follow Friday is hosted by Alison of Alison Can Read and Parajunkee of Parajunkee’s View. Every week a new question is posed, with the intent that everyone will gain new mutual followers. The hosts also interview a featured book blogger each week.

Question of the Week: What was the last book that made you cry?

As far as I can remember, it was Anne C. Voorhoeve’s My Family for the War, which was originally published in Germany as Liverpool Street.

This was one of the books I found for my final project in the YA Lit class I took in the fall of 2011. My topic was, unsurprisingly if you know one of my areas of historical expertise, Shoah literature. My top favourite books for this project, by a long shot, were this book and Paul Dowswell’s The Ausländer. Both were published abroad; I’d be surprised to hear of books like those easily accepted by a U.S. agent or publisher.

It’s a good old-fashioned Bildungsroman, taking Ziska (later renamed Frances) from age ten to seventeen. As I said above, it’s almost impossible to get that kind of book published as historical YA in the U.S. these days, when the character ages significantly over a long period of time, and starts out as not even a teenager.

Franziska (Ziska) is sent to England on a Kindertransport, taking the spot her best friend Bekka was supposed to have. Ziska and Bekka were on the outs before this happened, but it later grows to really haunt her. Though Ziska’s grandparents converted out of Judaism a long time ago, she’s still considered Jewish by the Nazis. At first, Ziska languishes in an orphanage with other Kindertransport children, but eventually is taken by a father and his teenage son.

When Ziska’s new foster mother Amanda comes home, she’s horrified to discover her husband and son took home a child wearing a cross, instead of a real Jewish child. But over the course of the war, the newly-renamed Frances grows much closer to Amanda than she ever was to her blood mother Mamu. Frances also comes to discover some secrets in Amanda’s past, such as the reason her in-laws treat her like garbage. I was really glad when Amanda finally stood up to those miserable people and told them where to stick it.

When the war ends, Frances has some difficult decisions to make, about whether she’ll stay in England, or return to the mainland to be with any relatives who might’ve survived. By this point, she considers England her home and Amanda her mother, and has also become Jewishly observant. Her old life is completely foreign. She’s also starting a romance with the slightly older Walter, one of the other young people who came over with her on the Kindertransport.

I hate the American cover! The headless/partial body trend needs to end NOW!

The Epilogue, set in the early Fifties, when Frances is in her early twenties and has her own little girl, really choked me up. It was just such a poignant, emotional finish to a great book. This is how proper historical YA should be written, following the character over an entire historical event, not just a short part of it, and focusing more on the journey of growing up instead of being plot-centric.