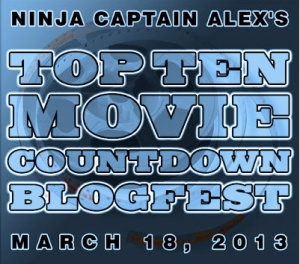 Ninja Captain Alex is hosting another of his popular blogfests. This one is a reprise of his first-ever blogfest, favorite movies. Participants are naming their ten favoritest movies.

1. The Inner Circle (1991). I discovered this film in July ’96, back when the History Channel still showed Movies in Time and hadn’t yet become such a joke. (Seriously, I doubt their founders envisioned programs like “The History of Root Beer” and “God Is an Alien.”) It’s based on the memoirs of Stalin’s film projectionist, Aleksandr Ganchin, renamed Ivan Sanchin in the film. I’m so glad I was able to tape it before the History Channel stopped showing movies. It’s one of those films that stays with you for always, with so many haunting lines and scenes.

2. The Confession (1970), another amazing drama I discovered through Movies in Time. It’s set in the former Czechoslovakia and takes place during their show trials after the war. It shows how people who were loyal Communists were betrayed by the system they loved and believed in, and were suddenly put into the shoes of their former oppressors and enemies. It ends with a haunting scene of the protagonist going back home during the Prague Spring and seeing this beautiful short-lived freedom brutally crushed by tanks. The final shot is graffiti on a wall, “Lenin, wake up, they have gone mad.”

3. The Juggler (1953), another treasure I found through Movies in Time. It’s set in 1949 and follows a psychologically traumatized Shoah survivor who has just arrived in Eretz Yisrael. He’s lost his wife and child, and feels very guilty he lived while they and so many others died. At one point he attacks a policeman so badly he puts him in hospital with a broken arm, thinking he’s a Nazi. He finally breaks down and admits he’s sick and needs help.

4. A Day at the Races (1937). This is my favorite Marx Brothers’ movie, and the ending always puts a smile on my face. I kind of guessed, the first time through, how it was going to end, but that didn’t take away my delight at seeing it happen. My first two Marx Brothers’ movies were the worst possible ones for a newbie, Love Happy and Room Service, so it took awhile for me to warm up to them and start to love them. This is one of their films I’d highly recommend to a potential new fan.

5. Modern Times (1936). This is my favorite Charlie Chaplin film, and the last time the dear Little Tramp appeared. Though it was the last major American silent, there are sound sequences, with a twist. The only speech comes from machines, and later, when the Tramp speaks for the first and only time, it’s in a nonsense song. The ending is so bittersweet, knowing we’ll never see this beautiful cultural icon ever again and that now he’s a race memory who lives in each of us. At least now we know he’s got company as he walks into the sunset to face the unknown, and that wherever he may be now, he’s doing just fine.

6. Blood and Sand (1922). This was my first Rudy Valentino film, and I still remember how my heart literally skipped a beat the first time I saw him in motion. He was such an amazing actor, throwing himself into all of his roles, even in his less-than-stellar films. If you’re interested in finding out what all the fuss was about, this is a great place to start. Do NOT see The Sheik as your first Valentino film! It’s probably going to give you a horribly wrong idea about his talents.

7. Anything by Laurel and Hardy, just about. Some of their shorts aren’t as great as others, though, and their post-Hal Roach feature films are hit and miss. Their new handlers didn’t really know what to do with them, and so put them into a number of films not worthy of their talents or special comedic personalities. Some of their 1940s films seem better-suited to a team like Abbott and Costello.

8. Just about anything from the Three Stooges’ golden era, about 1937-52, barring the last year or so of Curly’s time in the group. It’s so painful to watch most of the shorts made after Curly got sick, and I never want to watch Half-Wits’ Holiday ever again, knowing what happened to that dear sweet man shortly after he walked off-camera. Harry Cohn actually made Moe and Larry continue filming instead of going to the hospital with him. What a scummy slavedriver.

9. Ben-Hur (1925), one of the greatest silents ever made. This isn’t just a film, but an emotional experience you need to wind down from after watching. Ramón Novarro was so handsome and talented. His performance here is worlds better than Charlton Heston’s a generation later!

10.Metropolis (1927), quite possibly the greatest silent ever made, and the quintessential masterwork of the great director Fritz Lang. It was even more meaningful and powerful to me when I watched it again after becoming a Marxist-Socialist.