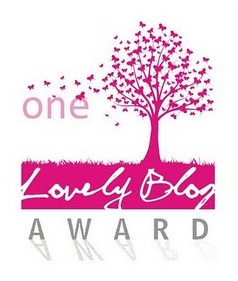 Back in May, I was nominated for the One Lovely Blog Award by Jim Wright, whose blog I found during the April Blogging from A to Z Challenge. Unfortunately, I had so many posts scheduled in my queue that I wasn’t able to post about it right away. I also decided to stop posting so frequently (though that still hasn’t exactly done wonders for increasing my traffic and percentage of comments per hits). Now I’m going to accept it, and give it to some fellow GUTGAA participants. The rules are to share seven things about oneself and to bestow the award on fifteen other people.

Seven things about myself:

1. I didn’t have chickenpox till I was 14 (February ’94), just one year before the vaccine became available in the States. I’d trade my natural immunity in in a heartbeat if it would mean being spared those two weeks of agony. Anyone who tries to claim that chickenpox is just some minor, fluffy disease has never met someone like me. Last summer, one of my four-year-old campers actually noticed the little white scars on my left forearm and asked what they were.

2. I learnt how to type when I was eight years old, with Mavis Beacon Teaches Typing, on my family’s dear ’84 Mac. Before long I was a pro and typing up to 90 wpm. I was typing expertly when just about all of my classmates were still doing the search and peck method.

3. I pretty much graduated to adult novels at 14, when I discovered Hermann Hesse, and didn’t really read much of my generation’s teen lit from that point on. I was one of those super-advanced readers who always read several grade levels up, who genuinely enjoyed 99% of the required reading in English and who finished way ahead of the rest of the class, who always preferred thick, juicy novels even in elementary school.

4. I’ve always dreamt about someday having my own little farm, with some crops, bees, chickens, ducks, and goats (not for meat). I’d feel so at home on a kibbutz or moshav if I ever make aliyah.

5. This month makes it 19 years since I began typing in Palatino, the font I’ve religiously used ever since. I will use the similar-looking Bookman as a backup if Palatino isn’t available, and I use Edwardian Script for fancy stuff like title pages and something like a wedding invitation in a book. I’m so used to Palatino that I cringe when I convert a document out of MacWriteII or ClarisWorks and it’s set in that butt-ugly, tiny, generic Times New Roman. I can’t put it back into Palatino soon enough!

6. I didn’t feel a thing when I had my left nostril pierced in June 2003, not even a prick when the needle went in. And I was able to have it left in during all of my surgeries.

7. I’ve had countless dreams over the years about being pregnant and having a boy first, and the boy is always named Samuel, the name I’ve had my heart set on for my future firstborn son since I was at least 12 years old. I no longer want 8 kids, but if I have at least one child, my Samuel, I’ll feel satisfied. Those dreams always feel like such a good omen, that even though I’ve been childfree way longer than I ever thought I’d be, even though I’m now past my fertility peak, there’s a little boy named Samuel William waiting to be my child.

I’m going to give the award to fellow GUTGAA participants:

And I’ll also give the award to some people I’ve discovered during other blogfests:

10 thoughts on “One Lovely Blog Award”