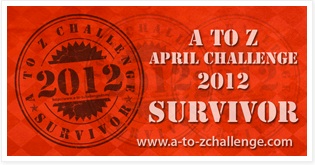 As part of the A to Z Blogging Challenge, participants are required to make a post sharing thoughts, reflections, etc., garnered during the challenge. I discovered a number of writing blogs I’m going to regularly visit even after the challenge, along with some non-writing blogs I found interesting. My favorite themes were the ones related to books and writing, but I also enjoyed some of the other themes, like nature, geography, music, famous women, art, and Eighties nostalgia.

Though I wrote my posts in advance, I went back and tinkered with just about all of them at least once. I was able to make some of the posts a tad bit shorter by taking out unnecessary backstory or verbiage. But keep in mind that my average blog post is a fair bit longer than some people are used to. To me, 800-1500 words is the kind of length I need to fully develop and discuss my topics, since I usually write about substantial, serious stuff.

Unless I’m doing something like Six Sentence Sunday or some other type of post based around brevity, it’s very rare for me to write something that’s all of 2-4 paragraphs or only 300 words. That’s just not who I am, though I am working on trying to keep future posts relatively short by my standards (ideally under 1000 words, perhaps up to 1200 if the topic requires more verbosity).

I enjoyed taking the time to write my posts and choose representative lines and scenes for the characters I was profiling. And since about half of the characters profiled came from my Atlantic City books, I had to, in large part, cull material from my handwritten magnum opus Cinnimin, all 42 (I think) notebooks of it to date, instead of going through computer files. It’s helpful that I know what’s in each notebook, after so many years.

Of my characters profiled:

4 were from my contemporary historical family saga of the Troys, the Ryans, and their friends

9 were from my Russian novels

13 were characters from past tense books

13 were characters from present tense books

5 of them were born in the 19th century

21 of them were born in the 20th century

6 of them were born in Manhattan

2 of them were born in Estonia

5 of them were born in the Russian Empire

1 was born in Vermont

1 was born in Washington, D.C.

1 was born in England

1 was born in Poland

1 was born in Hungary

2 were born in Germany

1 was born in the Netherlands

3 were born in Atlantic City

1 was born in New Jersey, outside Atlantic City

1 was born in Honolulu

3 started life on my family’s dear little ’84 Mac, which, though now long gone, will always live on through my first Russian novel. A piece of my family’s first computer still exists in the remaining original material of the first 7 chapters, so many years after that computer has become obsolete and an antique, and that feels very special and humbling.

And, because I’m such a birth junkie and advocate of natural childbirth, 8 of them were born at hospitals and 18 were homebirths. (Since, you know, that was kind of the norm until the early 20th century in America, and remains the norm in much of the world today.)

Of my 26 posts, there were 85 comments. I was kind of disappointed there were a few posts without any comments, like my posts on Quintina (who has some very funny lines) and Father Spiridon, but someone could always come across them at a later date. My three-most commented-on posts were my first three:

Allen, the noble big brother who goes clean and makes good for the sake of his little sisters, and later has a hard time seeing Adicia as a grownup woman who can make her own decisions about who to marry

Boris, the antagonist of my first two Russian novels, and one my favorite antagonists ever

I really enjoyed going around to people’s blogs each day and learning something new and discovering new people. It was a great way to network and meet new people in the writing community, even if some of the writers choose non-writing topics. Next year, I think I might like to do my theme on my favorite chapters. I’m old-fashioned and title my chapters, and enjoy making them like short stories or miniature novels unto themselves.